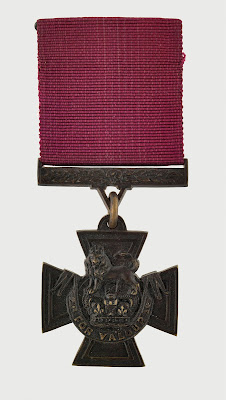 OTTAWA, February 2012 /Canada NewsWire/ - The Canadian War Museum is pleased to announce the acquisition of the Victoria Cross awarded to Private John Francis Young, a Canadian stretcher-bearer with the 87th Infantry Battalion during the First World War. His extraordinary heroism in the face of enemy fire saved the lives of many of his wounded comrades.

"The story of John Francis Young illustrates that heroism on the battlefield takes many forms," said James Whitham, Acting Director-General of the Canadian War Museum. "Private Young chose to serve his country unarmed, and was awarded the country's highest honour for his bravery."

On September 2, 1918, Private Young's company suffered heavy casualties from German shell and machine gun fire while advancing over a ridge near Dury in northern France. Despite continuous enemy fire and the complete absence of cover, Young went to the aid of the wounded, returning more than once to his company headquarters for more medical supplies. As noted in his Victoria Cross medal citation,

"This work he continued for over an hour, displaying throughout the most absolute fearlessness."

Later, when the German fire became less intense, Young—then 25 years old—organized and led stretcher parties to retrieve the wounded men he had treated.

John Francis Young was born in England and is believed to have come to Canada as a young man. He died in Ste-Agathe, Quebec, on November 7, 1929.

With this acquisition, the Canadian War Museum now holds 32 of the 94 Victoria Crosses awarded to Canadians. The medal is the British Commonwealth's highest award for military bravery.

Young was born in Great Britain on January 14, 1893. He was a 22-year-old tobacco packer in Montréal when he joined the 87th Battalion of the Canadian Expeditionary Force on October 20, 1915. Young served as a stretcher-bearer on the Western Front throughout the First World War, frequently braving enemy fire to rescue wounded comrades. He received the Victoria Cross for his exceptional courage in a battle near the war's end.

On September 2, 1918 Young was part of a Canadian Corps attack on the German defensive line that ran between the cities of Drocourt and Quéant in northern France. The attack was part of the Hundred Days campaign, which saw Canadian soldiers play a lead role in driving back and defeating the German armies. On this day, however, his battalion faced stiff German resistance. The Canadians came under heavy machine-gun and artillery fire from both flanks, and their advance stalled.

During the attack, John Francis Young tended to the wounded of his company which had suffered heavy casualties. Working on open ground swept by machine gun and rifle fire, he tended to the injured for over an hour. Several times he left the battlefield to resupply his medical kit, returning into harm's way for the sake of the wounded. He then organized his company's stretcher-bearers and led them to the men he had helped. For at least another hour, he directed the evacuation of over a dozen men. While leading these efforts, he was injured by the inhalation of mustard gas present on the battlefield.

For their attack on the German positions, 22 members of the 87th Battalion received the Military Medal, three were awarded the Military Cross, and one—John Francis Young—was honoured with the Victoria Cross. He received the medal from King George V on April 30, 1919, at Buckingham Palace.

After the war Young was demobilized from active service and he returned to Montréal and the tobacco company where he worked before enlisting. He also continued for some time with the Militia and reached the rank of Sergeant. He died on November 7, 1929, in a sanatorium in Ste. Agathe, Quebec. He was sent there after contracting tuberculosis, an infection linked to his wartime exposure to mustard gas.