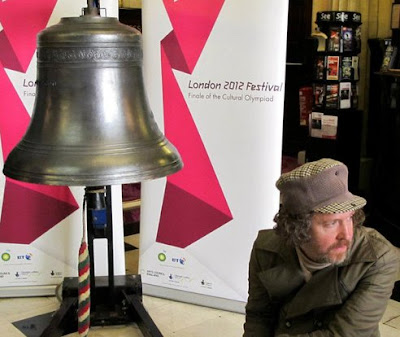 photo credit: all the bells/Public Domain

The cultural component to London's 2012 Olympics is both traditional (lots of Shakespeare) and quirky. The All the Bells project falls into the charmingly eccentric category. On July 27, 2012, bells will be ringing across the UK to celebrate the opening of the Games.

Dare we call it green? It's simple, no-tech, free, local and community based, no cars, no planes used AND inspirational. Bells have a particular resonance: for over 1,200 years church bells have called the faithful to worship in churches across the land, helping people to celebrate triumph and loss.

"It's by the people and for the people. On the morning of the opening of the games, it's a massive signal that something is happening," says Creed.

The project is formally called "Work No. 1197: All the bells in a country rung as quickly and as loudly as possible for three minutes throughout the country as the UK welcomes 205 nations from around the world."

It will take place at 8 a.m. because that is when the Olympic Torch will begin its final journey from Hampton Court Palace, through London, and on to the Olympic Stadium.

Lest you think that's an easy task, contemplate the scope of the All the Bells project. There will be church bells. That will include people in churches' bell towers taking part. Then there are the Morris Dancers, who jingle bells in their distinctive dancing.

Then there are the town criers from the Ancient and Honourable Guild of Town Criers who still work as volunteers in many small towns, ringing bells and spreading the word. A composer will create a new work for eight church bells with the Central Council of Church Bell Ringers.

Creed is a conceptual artist. Previous works have included a specially commissioned work for the Tate Britain Art Gallery consisting of a runner sprinting through the galleries at the art museum.

Creed will also be creating his own Martin Creed ringtone for your cell phone...as he says

"hold onto it, it’ll be worth something one day."