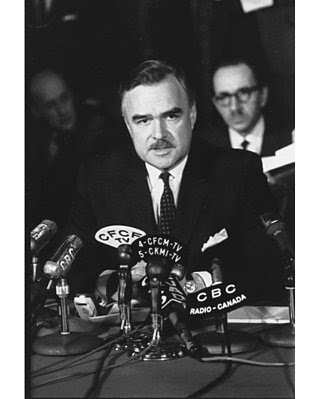 TORONTO, March 1, 2012 /Canada NewsWire/ - Today, the Ontario Heritage Trust unveiled a marker commemorating the gravesite of the Honourable John Parmenter Robarts, premier of Ontario from 1961 to 1971.

"John Robarts had great passion for the province and left a lasting legacy from his time in politics," said Dr. Thomas H.B. Symons, Chairman of the Ontario Heritage Trust. "His contributions to the areas of education, the arts, national unity and the economy will be remembered by generations to come. We are delighted to be able to honour his service to Ontario with a gravesite marker."

Born in Banff, Alberta, in 1917, John Robarts was the 17th premier of Ontario and the first premier born outside the province. He was a distinguished naval officer in the Second World War, after which he completed his education at Osgoode Hall. First elected to the legislature in 1951, he served as minister of education from 1959 to 1962. His governments focused on education and economic development. Robarts was a leader on national unity issues and co-chaired the task force on Canadian unity from 1977 to 1979. He served on a number of corporate boards and was chancellor of the University of Western Ontario and York University.

"John Parmenter Robarts was one of Ontario's most popular politicians of his time and highly regarded as premier," said Michael Chan, Minister of Tourism, Culture and Sport. "He made great strides in the development of our province, especially in education. Under his stewardship two of Ontario's iconic learning institutions, York University and the Ontario Science Centre, were constructed, leaving a legacy of learning that continues to benefit Ontarians to this day."

Steve Paikin, journalist and host of TVOntario's The Agenda, was master of ceremonies of the event held at The Cathedral Church of St. James. Among those in attendance paying tribute to John Robarts was the Honourable William Davis, 18th premier of Ontario and Robarts' successor. The marker will be installed at Robarts' grave in St. James' Cemetery in the spring of 2012. The cemetery is located at 635 Parliament Street, north of Wellesley Street, in Toronto.

The Premiers' Gravesites Program honours Ontario's former premiers and their service to Ontario by marking their gravesites. Specially designed bronze markers inscribed with the individual premier's name and dates of service are being installed at each gravesite, along with flagpoles flying the Ontario flag, where possible.

This program is administered by the Ontario Heritage Trust with funding support from the Government of Ontario. The Trust is an agency of the government dedicated to identifying, preserving, protecting and promoting Ontario's heritage for the benefit of present and future generations.