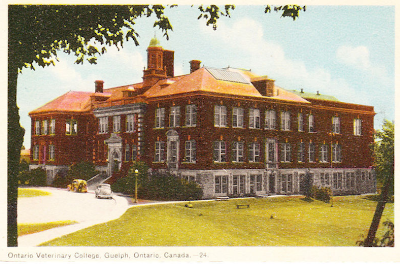 The museum is now located in the historical Loretto Convent building on Norfolk Street.

Honouring OVC’s 150th anniversary and the birth of veterinary medicine in Canada, the exhibit will give visitors an intriguing glimpse into the college’s challenges and accomplishments. A grand opening will take place March 23.

OVC was founded in Toronto in 1862 mostly to train people to look after horses, a vital part of the economy of then Upper Canada. As its focus broadened to farm animals and agriculture, the college moved to Guelph in 1922.

"Since then, OVC has played a significant role in shaping the city and the surrounding community — and people are interested in knowing more about what we do," said Peter Conlon, associate dean (students), and a keen student of OVC history.

The exhibit was assembled by Natasha Hayward, assistant history curator for OVC's 150th-anniversary project. Also involved were OVC staff, including Tara O’Brien, OVC 150 co-ordinator, and PhD student Lisa Cox, who has used college artifacts to learn about the history of zoonotic diseases. Hayward chose artifacts from 150 years of teaching, research and service at OVC.

One example is a copy of Canada’s first veterinary manual, one that was used widely around the world. When college founder Andrew Smith began teaching, he had one course and one textbook. An enterprising student from those early classes made this book from his class notes.

The exhibit also features historical photos and information and discusses today’s veterinary practice and the life of a veterinary student.

Located at the heart of Guelph in the newly renovated Loretto Convent, the Guelph Civic Museum showcases Guelph’s history through permanent and changing exhibits, a fun and interactive families gallery and special events and activities. The historic 1850s building, atop the hill on Norfolk Street and beside the landmark Church of Our Lady, is now the home for a collection of over 30,000 artifacts that illustrate the rich history of Guelph.