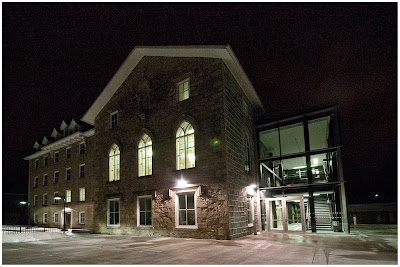 GUELPH, Ontario, February 24, 2012 – The new Guelph Civic Museum officially opened its doors today at a ceremony attended by representatives of all three levels of government, Museum supporters, the Guelph Museums Advisory Committee and staff. Celebrations will continue throughout the weekend with free public open houses and behind-the-scenes tours today from 5-9 p.m., and Saturday and Sunday from 1-5 p.m.

At 30,000 square feet, the new Civic Museum is more than twice the size of the former Dublin Street location. It features a much larger, interactive children’s gallery; a research room; and ample space for exhibits, archives, and storage for the museum’s collection. The Civic Museum is an adaptive reuse project that gives new life to one of Guelph’s most prominent heritage buildings, the former Loretto Convent, which was once threatened with demolition.

Ontario’s Minister of Tourism, Culture, and Sport, the Honourable Michael Chan, was on hand for the official opening.

“I am delighted to participate in the official opening the new Guelph Civic Museum,” said Minister Chan. “The McGuinty Government recognizes the value of Ontario’s museums, as they promote local history, conserve our shared heritage and deliver innovative cultural programming. True cornerstones of our communities, museums contribute to our economy by attracting visitors and Ontarians alike to learn more about our rich heritage.”

"Our new Guelph Civic Museum is a beautiful, engaging place to discover the names, faces, and events that tell the story of Guelph," said Mayor Karen Farbridge. "This project is an incredible success story because it provides a new cultural amenity for our community while preserving and renewing a significant and cherished heritage building. Thank you to all who had a hand in its success."

The Loretto Convent was built in the 1850s, with additions in 1872 and 1896. While its exterior retained its original character, its interior had been renovated many times over the years and held little heritage value. The renovated Museum, designed by +VG Architects - The Ventin Group Ltd., has a blend of historic stone elements with modern glass, and provides a bright and functional museum space with stunning views of the city.

The building is located next to the most prominent landmark in Guelph, the Church of Our Lady, and is owned by the Diocese of Hamilton. The City has entered into a long-term lease with the Diocese at a cost of $10 per year.

The Guelph Civic Museum has existed since the 1960s and had been located at 6 Dublin Street South since 1980, where the Museum’s growing collection exceeded the building’s capacity. When funding from the federal and provincial governments was announced in 2008, the new Civic Museum project was able to proceed, and construction began in February 2010.