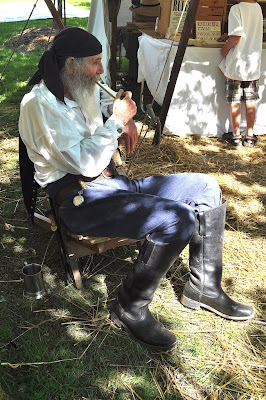 FREDERICTON, New Brunswick, February 22, 2012 /Canada NewsWire/ - Residents of Fredericton and surrounding areas will be able to participate in important commemorations for the 200th anniversary of the War of 1812, thanks to an investment from the Government of Canada. Support was announced today by the Honourable Keith Ashfield, Minister of Fisheries and Oceans, Minister for the Atlantic Gateway, and Member of Parliament (Fredericton), on behalf of the Honourable James Moore, Minister of Canadian Heritage and Official Languages.

With this investment, the St. John River Society and the Fredericton Region Museum will be able to offer programming to help local residents learn more about the role played by New Brunswick during the War. Activities will include a re-enactment of the March of the 104th Regiment of Foot and a special museum exhibit.

During the War of 1812, the winter of 1813 was one of extreme cold and heavy snows. Between February and April, the 104th Regiment of Foot marched more than 1100 kilometres from Fredericton, New Brunswick, to Kingston, Ontario, to reinforce British troops and thwart an expected invasion by the Americans. This effort by a regiment of poorly clothed, frostbitten and hungry soldiers stands as an incredible feat in military history.

"Canada would not exist had the American invasion not been repelled during the War of 1812, and for that reason, the War was a defining chapter in our history," said Minister Moore. We invite all Canadians to learn more about the War of 1812 and take part in many of the activities and events that will pay tribute to our heroes."


"By supporting these activities, our Government will give residents of New Brunswick and tourists from outside the province the opportunity to appreciate this important moment in our history," said Minister Ashfield. "We are proud to help celebrate the heroic efforts of our ancestors and tell the story of the Canada we know today."

"The financial support from the Government of Canada is essential to the success of our many activities commemorating the War of 1812 in our province," said Peter Pacey, Chair of the St. John River Society War of 1812 Commemoration Committee. "New Brunswick played a pivotal role in the War of 1812 and Canada's road to nationhood. This funding, along with strong partnerships, will allow us the opportunity to share this heritage with citizens and communities in our province."

"We believe it is very important to commemorate historical events such as the War of 1812, and we are pleased to have the support of the Government of Canada," said Fred White, President of the York Sunbury Historical Society, which operates the Fredericton Region Museum. "Our special exhibit would not be possible without funding from programs such as the 1812 Commemoration Fund. This exhibit will be an excellent way to highlight New Brunswick's rich heritage and the legacy of the War of 1812."

The Government of Canada has provided funding of $142,060 to the St. John River Society and $7,800 to the Fredericton Region Museum, for a total of $149,860. This support is provided through Canadian Heritage's Federal Secretariat for the Bicentennial of the War of 1812 Commemoration Fund. The Secretariat supports community-based projects to foster greater awareness and understanding among Canadians of the importance of this moment in our history.

Visit 1812.gc.ca for more information about the Commemoration Fund.