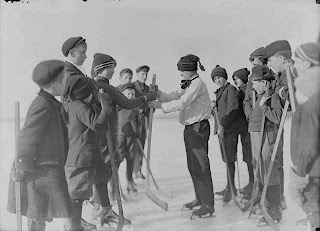 The event was conceived by Home Hardware's Gardening Expert Mark Cullen and Windsor Home Hardware Dealer, Jeff Redden in response to reports that the Hockey Heritage Museum was facing closure due to lack of funding.

"Hockey is a Canadian game and is a central part of life in communities from coast to coast. Jeff and I knew something had to be done to ensure that the Hockey Heritage Museum has a sustainable future," said Mark Cullen, Home Hardware's Gardening Expert.

Cullen and Redden approached other local businesses and community organizations and, along with the Windsor Hockey Heritage Society, formed a committee to organize this worthwhile event.

"Home Hardware has a long tradition of supporting hockey across Canada from minor hockey to junior hockey to the pros," said Jeff Redden, Dealer-Owner, Windsor Home Hardware. "Mark and I knew how important this part of our history is not only to the people of Windsor, but to all Canadians. And what better way to support the Hockey Heritage Museum than to bring the community together to play a little outdoor shinny."

The Long Pond Heritage Classic will pit six teams (74 players) in vintage NHL jerseys against each other in a four on four shinny tournament in support of the Hockey Heritage Museum. Following a morning of guided tours at the Museum, teams will gather for lunch at the celebrated Kings-Edgehill School - home of the world's first hockey players - before making the historic trek to Long Pond for the tournament.

The tournament will be followed by a meal, reception and an evening of entertainment and auction of hockey memorabilia. Former NHL stars Jaro Sevcik, Terry O'Reilly and Syl Apps Jr. will be in attendance, along with the president and CEO of the AHL, David Andrews.

"The outpouring of support from across Canada has been overwhelming, and we would like to thank everyone on the organizing committee, all the sponsors and everyone taking to the ice on Saturday for supporting this worthy cause."

In addition to the tournament, Home Hardware's Gardening Expert Mark Cullen held a private event at Windsor Home Hardware on January 10 to raise money for the museum.

For more information, or to support the Long Pond Heritage Classic, please visit their website.

100% Canadian owned and operated, Home Hardware Stores Limited has a presence in every Canadian province and territory and is the country's largest independent, Dealer-owned hardware, lumber, building materials and furniture cooperative. Founded on January 1, 1964 by 122 independent hardware Dealers, the cooperative now includes more than 1,080 stores, under the Home Hardware, Home Building Centre, Home Hardware Building Centre and Home Furniture banners, with annual collective retail sales of more than $5 billion. Home Hardware's independent Dealer-Owners, recognized by the North American Retail Hardware Association as Canada's best-trained Dealer group, have access to 100,000 quality brand name and private label products, a world-class distribution system and draw upon the power of Home Hardware's network to provide their local communities with top quality products and services at competitive prices.
Posted by ol' duffer at 5:05 AM