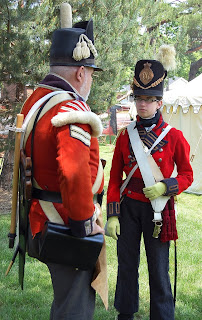 GUELPH, Ontario February 17, 2012 - Some of Canada’s most respected and popular War of 1812 historians will gather at the University of Guelph Feb. 25 for a War of 1812 bicentennial symposium.

The event, which is open to the public, will include re-enactors in period costumes, storytelling, public talks and battle recreations. Registration details

Uniformed “soldiers” will help direct people to the conference, to be held in Rozanski Hall.

The event is sponsored by U of G’s history department and the Cambridge, Ontario based 41st Regiment of Foot re-enactment group, as well as “living history” groups in London and Hamilton, the Wellington County Museum, the Guelph Historical Society and Guelph Museums.

At 9 a.m., keynote speaker and historian David Graves will discuss “Whither the War of 1812,” a review of historical literature about the war over the past four decades. Lt.-Gen. Jonathon Riley will give the closing keynote address on “1812 Coalition War, World War” at 3 p.m.

Adwoa Badoe, a Guelph author and storyteller, will discuss “Richard Pierpoint: A Black Volunteer in the War of 1812” at 1 p.m. Her talk is part of Black History Month.

Also featured are a period dinner, dancing and games. A complete schedule is available online here.