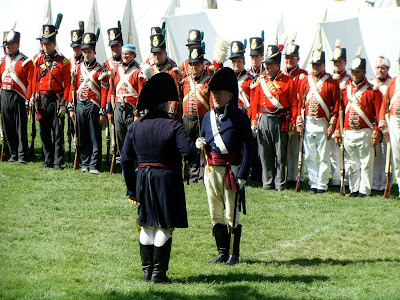 TORONTO, February 17, 2012 /Canada NewsWire/ - Today, the Ontario Heritage Trust hosted a special event at its new Parliament interpretive centre to kick off the province's celebrations for Heritage Week 2012, which runs from February 20 to 26, and to launch the commemoration of the bicentennial of the War of 1812.

"As we gather here today at one of the province's most significant historic sites to celebrate the launch of Heritage Week 2012, we are reminded of the people, places and events that have shaped our society," said The Honourable David C. Onley, Lieutenant Governor of Ontario. "This year, the people of Ontario will have the opportunity to mark several notable historic milestones, from the bicentennial of the War of 1812 to the commemoration of Queen Elizabeth II's Diamond Jubilee."

"The new Parliament interpretive centre will help educate and enlighten Ontarians on our collective past while honouring our heritage," said Michael Chan, Minister of Tourism, Culture and Sport. "This Heritage Week and in the months ahead, I encourage Ontarians to explore this significant site as the first permanent home of democratic government in our province and learn more on the events of the War of 1812 that have shaped Ontario into the place we cherish today."

This year's theme, "Defending a nation," offers an opportunity for communities across the province to commemorate 2012 as the bicentennial anniversary of the War of 1812 - a significant and defining event in Canadian history. During Heritage Week 2012, communities are also encouraged to reflect on other major conflicts in our history, and examine how they have influenced our culture and our physical environment. Heritage Week events and activities throughout the province are listed on the Trust's website here.

"Heritage Week is a time to reflect upon our rich history and to honour the contributions of those who have helped to preserve our precious heritage resources," said Professor Thomas H.B. Symons, Chairman of the Ontario Heritage Trust. "With the opening of the Trust's new Parliament interpretive centre, the story of the birthplace of representative government in Ontario - and the struggles of war witnessed during the province's critical formative years - comes to life."

Today's event, featuring special guest emcee Nil Köksal, weekend anchor of CBC News Toronto, showcased presentations, remarks from dignitaries and special performances by school groups and the Fort York Guard. Also among the highlights was the opening of the centre's exhibit, Foundations & Fire: Early Parliament and the War of 1812 Experience at York.

The Parliament interpretive centre is located at 265 Front Street East, on a property acquired by the province and transferred to the Trust in 2005. It and three adjoining properties comprise the site of Ontario's first purpose-built parliament buildings. Opened in 1797, the buildings were burned by invading American forces during the War of 1812. They were later rebuilt, but were destroyed by fire again in 1824. Today, the site is both historically and archaeologically significant for its association with the beginnings of our representative government.

Next week, a number of Ontario Heritage Trust sites are hosting special events. Free guided tours are being offered at the Elgin and Winter Garden Theatre Centre and at Enoch Turner Schoolhouse in Toronto. A series of free lectures and guided tours are also happening at Fulford Place in Brockville. In addition, on Friday, February 24, The Honourable David C. Onley, Lieutenant Governor of Ontario, will present the annual Lieutenant Governor's Ontario Heritage Awards at Queen's Park, in partnership with the Trust. Visit www.heritagetrust.on.ca for details.