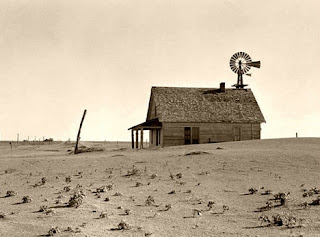 from TreeHugger.com
by John Laumer, Philadelphia

US demographic history includes several major internal migrations (in-migrations). Everyone knows how First Peoples were pushed West and South as European colonists settled in and dispersed from the East. The Erie Canal, built in the 1820's, opened up the Great Lakes for commerce and drew settlers from eastern states. The Dust Bowl permanently displaced Oklahoma and Texas farmers to California and other states. In the early 1900's, African Americans left the rural south for Chicago and Detroit and Milwaukee in pursuit of jobs. After WWII, city folk began the continuous, nationwide slog to the suburbs. By the 1970s retiring Snow Birds, many leaving the first and second ring suburbs in northern cities, began their exodus to Nevada, Arizona, Florida, Utah, Colorado, & New Mexico. What's next?

Pay no mind to what economists offer.
All large scale migrations have both a 'pull' and a 'push' component. Economists focus mainly on the pull: 'they came for political refuge' - 'better jobs' - 'access to resources' and lately 'freedom from government regulation.' That's because economists have metrics and data sources for what happens post-migration, but few to none for what had 'pushed' people away from an existing home and on to a new one. Very often, environmental mismanagement plays heavily into the push factor. (See footnote for discussion of impact on GDP.)

There is no mystery, for example, about root causes of the Dust Bowl: the clearing of trees and simultaneous plowing of short grass prairie soil over vast areas, baring soils to the wind. (Today's drought in Texas is every bit as bad, but farming practices have improved and tree lines were re-established.)

There are few measures of the extent to which colonial era tobacco farmers of the US mid-Atlantic coastal states - the Virginias most notably - ruined their land producing only tobacco for export, and thus had to move. (The process is well documented in genealogy records, however, as family names on land deeds can be tracked westward.)

Historic pull-politics of US in-migration.
The economic development of many southern states has been strongly dependent upon Federally constructed water projects needed for moving coal and other commodity goods, for provision of potable water, and upon coal-fired power - TVA is a Federally created utility - advantages that recently have been leveraged with' right to work' laws.

Take any one of these three advantages away and the southern economic 'pull' could be diminished. (If you need an illustration of how important Southern water projects were, look back to the Atlanta-area drought that led to states suing each other and to Georgia challenging the location of it's boundary with Tennessee (so it could get access to the northerly Tennessee river basin).

Climate push factors.
It's fairly straightforward to envision a continued regional pattern of severe flooding and/or wind damage or, conversely, of severe, extended drought encouraging large numbers of city dwellers and suburbanites to start a new life elsewhere. Texas is practically headed down this path already. (Farmers these days are so few and far between that, unlike in the Dust Bowl era, not even their total displacement from the entire State of Texas would be viewed as massive.)

Climate pull factors.
Here's an easily foreseen scenario. Hydroelectric power, the dominant source of electricity in the Pacific Northwest, remains cheap decade after decade, long after Cap & Trade becomes a reality - which it most certainly will. As stated above, highly coal-dependent southern states, on the other hand, could gradually lose a bit of their economic pull as coal slowly becomes more costly. That gradual loss of economic draw could divert some of what might have been a southern economy to the northwest.

Water is the nexus in both the push and the pull scenarios (above).
If southern states suffer both increased frequency and intensity of drought while paying more for coal-fired electricity, and if the north western states do not suffer a similar level of drought, well then you can see as well as I can where the next great in-migration might be headed.

A parallel push pull scenario can be drawn up for the Great Lakes vs Southern states, if, and only if, Great Lakes states are able to massively scale up offshore wind power and maintain the existing nuclear fleet. Southern coastal states could overcome that advantage with their own offshore wind farms. Seems iffy, given the propensity for coal dependency in both regions.

No climate model needed.
Climate change has been modeled well enough to see that planetary level physics are shifting. But, climate models are of little use on their own for understanding the combined effects of the pushes and pulls that could drive in-migration.

Politics.
I believe that congressional delegations from coal-dependent states know exactly what they risk if coal loses an economic edge, and that understanding is why they resist climate action with every tactic they can muster. Water, however, is a wild card that no politician can shunt with spin and the campaign power unleashed by the Citizens United ruling. Water, or the absence of it, will be the main factor behind the next great in-migration and also the main factor behind the next major political trend.

If I were a southern state governor I would do everything I could to encourage water conservation.

At the same time, out of pure economic self interest, as hypothetical governor I would offer encouragement and political support for northern state labor unions, including the continuance of collective bargaining rights for public employees in those northern states. That way, if southern coal-fired power did have to become more costly, my state's lower labor costs would help make up for the lost advantage.

Footnote: Believe it or not!
Every time a Federal disaster declaration is made, and taxpayer dollars are given for the cleanup and rebuilding afterward, all that money is counted to the plus side of gross domestic product (GDP), That's right. The more hurricane tornado flood or drought disaster dollars that are spent, the greater our nation's GDP. Is that screwed up or what?

Economists not only focus just on the 'pulls,' they absurdly continue the archaic process of making adverse climate impacts look like a good thing, economically. Climate change is good for the economy. Yea!

I know pretty well what you Ayn Rand fan boys are about to say in the comment field. 'See..if we just get big government out of the way (and small enough to drown in the bathtub per Grover Norquist's oft quoted dictum) everything will be good.' Is that what you want? Mass migration from the Lower Mississippi River Basin? A big chunk of Texas moving to where...Atlanta or Seattle?

This land was made for you and me. Let's keep it that way together.