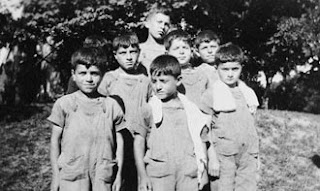 "The arrival of Armenian child refugees at Cedarvale Farm in Georgetown helped to lay the groundwork for this country's international humanitarian efforts throughout the 20th century," said Dr. Thomas H.B. Symons, Chairman of the Ontario Heritage Trust. "We are proud to honour this significant event in our history with this provincial plaque."

On July 1, 1923, a group of 50 Armenian boys arrived at this farm site from an orphanage in Corfu, Greece. The 'Georgetown Boys,' as they came to be known, arrived in Canada between 1923 and 1927 - 109 boys in all. The orphans were survivors of the Armenian Genocide (1915-1923). Their plight touched the hearts of thousands of Canadians, who raised significant funds and lobbied the Canadian government to bring them here. Under the care and supervision of the Armenian Canadian Relief Fund's Farm and Home Committee, the children lived at Cedarvale Farm located on this property and were taught English and farming skills. By 1928, the orphans were placed with farm families in Southwestern Ontario. As adults, most of the Armenians became Canadian citizens and chose to remain in this country. By providing assistance to non-British Commonwealth refugees, the Armenian Boys' Farm Home was the first humanitarian effort of its kind in Canada.

"The plight of the Georgetown Boys is a powerful reminder of our deep conviction as Ontarians and as Canadians to help those in need," said Michael Chan, Minister of Tourism and Culture. "This plaque helps to honour our history and commemorate this experience that has shaped the cultural fabric of this community and the province."

The unveiling ceremony took place at the Armenian Youth Centre - Hamazkayin Theatre in Toronto. The plaque will be permanently installed at Cedarvale Park in Georgetown, the site of the Armenian Boys' Farm Home.

"Canada's humanitarian efforts in aiding the 109 orphaned Armenian children who survived the Armenian Genocide of 1915 must be remembered and commended," said Armenian Community Centre President Vatche Kelebozian. "This provincial plaque will immortalize the memory of the Georgetown Boys and act as a permanent reminder of Canada's proud humanitarian tradition and its unyielding commitment in aiding Armenians."

...There are 110 provincial plaques in the city of Toronto.

For more information on the Provincial Plaque Program, visit www.heritagetrust.on.ca.