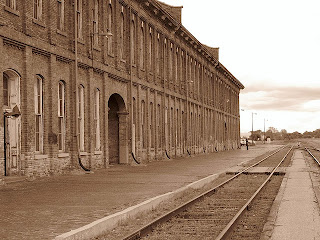 The St. Thomas Canada Southern (CASO) Station, financed by American railway promoters, was constructed between 1871 and 1873 to serve as both the passenger station for St. Thomas and CASO's corporate headquarters. During the 1920s, the station was one of the busiest in Canada. The Canada Southern rail route through southwestern Ontario ultimately linked Chicago and New York City, and was instrumental in the economic development and growth of St. Thomas. Designed in the Italianate style by Canadian architect Edgar Berryman (1839-1905), the impressive building is embellished with classical details such as pilasters, arched windows and passageways, wide eaves and a heavy cornice supported by paired brackets. The building's design, scale and quality of interior finishes make it unique within Canadian architectural history and it stands as a symbol of the importance of railway development in southern Ontario.

"The St. Thomas Canada Southern Station strongly influenced the economic development of southwestern Ontario and the city of St. Thomas," said Minister of Tourism and Culture Michael Chan. "We cannot forget the impact these stations had in shaping our province - both from the community impact and their heritage significance."

The unveiling ceremony occurred at the CASO station, where the provincial plaque will be permanently installed.

"The railways helped build this community," said Joe Docherty, Executive Director of the North America Railway Hall of Fame, "and the workers they attracted helped settle the surrounding area. St. Thomas has rallied behind the efforts to restore this landmark building through their financial contributions and volunteer labour, showing how the railways continue to influence this community and keep it strong."

"The heritage of St. Thomas is strong," said Steve Peters, MPP Elgin-Middlesex-London and Speaker of the Ontario Legislature. "Provincial plaques such as this one identify people, places and events from our past that help define our future. The City of St. Thomas is proud to be recognized again today with this unveiling to commemorate the CASO station."

...There are 229 provincial plaques across Ontario commemorating transportation systems and communications.

...There are 11 provincial plaques in St. Thomas - including Alma College and Jumbo the elephant.

For more information on the Provincial Plaque Program, visit www.heritagetrust.on.ca.
Posted by ol' duffer at 6:59 AM