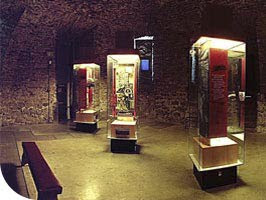 Visitors are invited to gather on the archaeological site in the basement of Notre-Dame-de-Bon-Secours Chapel, jewel of Montreal's heritage. On this unique site, they can contemplate the ruins of the 17th-century chapel and a number of artefacts that confirm just how destructive the 1754 fire was. The visit will also include the magnificent 18th-century stone crypt with a fascinating exhibit on the history of the chapel and the surrounding neighbourhood.

During the 1996-1997 dig, the archaeologists were astounded by the quality and quantity of the artefacts discovered. More than 5000 items were uncovered on strata covering a period of over 2400 years. In fact, built on an embankment along the river, the chapel stood right beside a number of First Nations artefacts that were found during the dig. Notre-Dame-de-Bon-Secours Chapel, centre of Montreal's first neighbourhood outside the original settlement, has been closely connected to the history of the city since its beginnings.