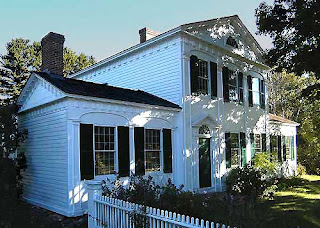 GRAFTON, Ontario, June 2, 2011 /Canada NewsWire/ - Join us this summer at the historic Barnum House for another season of guided tours and special events! Approximately two hours east of Toronto, Barnum House Museum is located in Grafton, in the beautiful setting of Northumberland County.

At Barnum House, visitors can explore furnished rooms throughout the historic home. The house was built in 1819 by Eliakim Barnum, who was a successful entrepreneur. Barnum immigrated to Haldimand Township from the United States around 1807 and subsequently opened a tavern, a small distillery and a grist mill. By 1820, after the house was built, he added 900 acres of adjoining farmland. The home's design was influenced by American architecture that was popular in the New England states at the beginning of the 19th century. Today, it remains one of Ontario's finest examples of neoclassical architecture.

Barnum House is a National Historic Site owned and operated by the Ontario Heritage Trust. The Trust is an agency of the Government of Ontario dedicated to identifying, preserving, protecting and promoting Ontario's heritage.