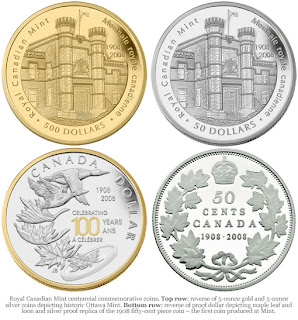 Celebration of Canadian heritage continues with precious collectibles based on Canada's first silver dollar; the first historical account of Lacrosse; "The Maple Leaf Forever" the Bigleaf Maple; and the Black-Footed Ferret

"As our collector coin business and our customer base keep growing, the Mint is proud to offer new and long-time collectors an increasing choice of coins which captures meaningful themes and attractive designs," said Ian E. Bennett, President and CEO of the Royal Canadian Mint. "This newest product offering shows that the Mint is committed to advancing the artistry and science of coin-making while appealing to the needs of all our customers."

Below are descriptions of the featured products which will be available to the public as of July 21, 2011.

The Mint is paying tribute to a turning point in numismatic history by issuing a limited-edition silver dollar marking the centennial of Canada's first and very rare silver dollar.

While the Currency Act of 1910 authorized the striking of one-dollar silver pieces for Canada, the passing of King Edward VII in May 1910 and the crowning of King George V pressured the Royal Mint to produce new master tooling for all of Britain's colonies and Dominions. While a few trial pieces in silver and one in lead had been struck with the effigy of the new King, Canada's first silver dollar was abandoned in favour of producing existing denominations with the correct effigy of Canada's new Sovereign. Today, only one 1911 silver dollar remains in private hands, while its remaining lead and silver counterparts have been conserved by the Currency Museum of the Bank of Canada in Ottawa.

This change in Sovereign provoked another turn of events with the issue of Canada's "Godless" coinage of 1911". The Royal Mint had asked Canada's Department of Finance to choose between obverse designs (the "heads" side of a coin) in English or Latin. While the Latin version was chosen, the Minister Finance failed to notice the proposed inscription lacked the words "Dei Gratia" or "By the Grace of God" when approving the design. As stocks of 1910 circulation coins were rapidly depleting by the time the new production tooling arrived from England, Canada had no choice but to issue "Godless" versions of its circulation coins in 1911.

This unique series of circulation coins is faithfully reproduced in a special-edition, double-dated proof set of all of Canada's existing denominations of the era, including the short-lived one dollar coin. With exception of the pure copper penny, all these historic coins are crafted of sterling silver. The Proof Set is limited to 6,000 examples world-wide and retails for $179.95 CAD, while only 15,000 individual special-edition silver dollars are available at $64.95 CAD.

The rising popularity of its silver kilo coin category has allowed the Mint to use this bold format to strike a 99.99% pure silver kilo coin with an intricate new design imagining the scene, 375 years ago in New France, of the first European observation of the timeless sport of Lacrosse by French Jesuit priest Jean Brébeuf in 1636.

To First Nations people, including the Huron Nation among which Jean Brébeuf lived, as the sport originally named "baggataway" was revered as "The Creator's Game", thought to have been invented for his own amusement. It became a proving ground for young warriors and a non-warring way to settle tribal disputes, with matches covering vast expanses and sometimes lasting months at a time.

The name Lacrosse was coined Jean Brébeuf himself, who thought the curled players' sticks resembled a Bishop's staff; known as a crosier. Such are the roots of Canada's national game, which are elegantly illustrated on a more than 10-centimetre wide coin displaying brave Huron warriors of 375 years ago, fiercely competing for honour and glory on the playing field. This impressive coin was designed by British Columbia painter Steve Hepburn and is limited to a mintage of 600 world-wide. It retails for $2,195.95 CAD.

The maple leaf is the symbol which says "Canada" to the rest of the world. Its image has been celebrated in art, literature and even song, when Alexander Muir's "The Maple Leaf Forever" was published in 1867; the year of Confederation.

In June 2011, the Mint produced gold and silver kilo coins whose maple leaf design was inspired by the reverse of our iconic one-cent "penny" circulation coin. Designed by artist Debbie Adams, the trio of maple leaves honouring "The Maple Leaf Forever" can now be found on a half-ounce, 99.99% pure silver coin with a $10 face value.

One of the Mint's most popular technologically-enhanced coins returns with the new "Bigleaf Maple" crystal raindrop coin. Made of 99.99% pure silver and designed by renowned botanical artist Celia Godkin, this coin features a painted leaf of this gigantic West Coast maple species from whose tip clings a drop of water representing by a brilliant Swarovski Element crystal.

The Mint is pleased to offer 10,000 of these coins at the retail price of $109.95 which, like its predecessors, is likely to sell out quickly.

The fourth instalment of the Mint's unique square-shaped, gold-plated silver collector coins honouring some of Canada's most vulnerable wildlife species features the Black-Footed Ferret. Displaced from its native Canadian Prairie habitat in the early 20th Century, the Black-Footed Ferret is gradually returning to the Prairie through the efforts of dedicated volunteers and conservationists who are re-establishing colonies through efforts such as the Grasslands National Park wild release program.

Composed of gold-plated sterling silver and designed by accomplished artist and coin designer Jason Bouwman, this coin is limited to a mintage of 15,000 coins world-wide and retails for $62.95 CAD.

All of the Mint's products are available directly from the Mint at 1-800-267-1871 in Canada, 1-800-268-6468 in the US, or on the Internet at www.mint.ca. The coins are also available at the Royal Canadian Mint's boutiques in Ottawa, Winnipeg and Vancouver, as well as through Toronto's CN Tower gift shop, and via our global network of dealers and distributors, including participating Canada Post outlets.

The Royal Canadian Mint is the Crown Corporation responsible for the minting and distribution of Canada's circulation coins. An ISO 9001-2008 certified company, the Mint is recognized as one of the largest and most versatile mints in the world, offering a wide range of specialized, high quality coinage products and related services on an international scale. For more information on the Mint, its products and services, visit www.mint.ca