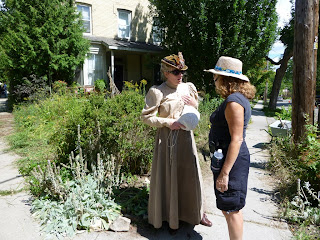 Prime Ministers of past and present collide with a special episode of Murdoch Mysteries, involving Sir John A. Macdonald and Sir Wilfrid Laurier and a murder that risks national security

The Prime Minister's scene was shot on October 15, 2010, and directed by actor Yannick Bisson, who plays Detective William Murdoch in the popular series.

"Murdoch Mysteries is my favourite program…It's wonderful to meet these people who can take characters of over 100 years ago, make them three dimensional and bring them to life. It's a lot of fun to see them work and try to work with them a little as an amateur," said Prime Minister Stephen Harper on the set of Murdoch Mysteries.

Set in late 1890s Toronto and based on Canadian author Maureen Jennings' popular series of novels, Murdoch Mysteries explores the intriguing world of William Murdoch (Bisson), a handsome young detective using radical forensic techniques, for the time, to solve some of the city's most gruesome murders.

In episode 407 "Confederate Treasure," premiering July 20, the discovery of a map and a letter signed by Canada's first Prime Minister, Sir John A. MacDonald, is found on the corpse of a murder victim, sending Murdoch on an investigation that risks national security. When the victim is identified as a former Minister of Defence, Canadian spy Terence Meyers (Peter Keleghan) - Murdoch's nemesis - warns Murdoch off the case. With the help of Prime Minister Wilfrid Laurier, Murdoch learns the map is thought to indicate a spot in Lake Ontario where a small fortune in gold was sunk - gold intended to influence the outcome of the American Civil War. In a race against time to avoid a major diplomatic dispute, Murdoch and his team set sail under cover of darkness in a desperate attempt to locate the gold before the Americans do.

With a passionate following of loyal audiences in Canada and around the world including the UK, France and, most recently, China, Murdoch Mysteries has been sold to broadcasters in 100 countries and is one of the most successful international co-productions in Canadian television history.

Prime Minister Stephen Harper is the latest in an elite list of prominent guest stars to the series including Victor Garber, Lisa Ray, Simon Williams, Nicholas Campbell and Lally Cadeau.

Murdoch Mysteries is developed and produced by Shaftesbury in association with Citytv, a division of Rogers Media Inc., ITV STUDIOS Global Entertainment and UKTV, and with the assistance of the Canadian Film or Video Production Tax Credit, the Ontario Film and Television Tax Credit, the Canada Media Fund, the Bell New Media Fund and the Cogeco Production Development Fund. ITV STUDIOS Global Entertainment holds worldwide distribution rights for the series (excluding Canada and the UK). Season four of Murdoch Mysteries premiered in Canada on June 7, 2011 on Citytv. Season five is currently in production in and around Toronto, Ontario.

Check out Citytv.com for full episodes and exciting extras from some of your favourite Citytv programming, available 24 - 48 hours post broadcast. You can now also catch up on your iPad by downloading the free Citytv video app on iTunes.

Citytv™ television stations in Toronto, Vancouver, Calgary, Edmonton and Winnipeg offer viewers intensely-local, urban-oriented, culturally-diverse television programming. A distinct alternative to other conventional television stations, Citytv engages its viewers with dynamic on-air personalities and delivers an entertaining mix of news, local-interactive formats such as: Breakfast Television and CityLine; as well as local Canadian and US acquired prime time entertainment programming. Citytv is a part of Rogers Broadcasting Limited, a division of Rogers Communications Inc. (TSX: RCI and NYSE: RCI) which is a diversified Canadian communications and media company. For more information on Citytv stations and programming, visit www.Citytv.com