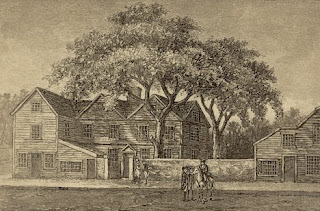 The story of America's struggle for independence tells tale of heroic men and women united in their noble quest for freedom -- but one of the most enduring figures at the center of that revolution was not a person at all. Years before the Founding Fathers gathered in stately halls and meetinghouses to shape what would become the Declaration of Independence, the seeds of liberty had been planted and nurtured in a far more humble setting -- beneath the branches of an elm tree.

Just a few short years after the arrival of Puritans to the New World, when the land was yet untamed, an elm tree sapling took root. In the decades which followed, the city of Boston would rise up around that elm tree -- but their humble beginnings could hardly predict the important role both town and tree would have in shaping history.

By the mid-18th century, many prominent colonists in Boston had grown weary of living under British rule, made worse by the passage of a Stamp Act which effectively taxed and censored written correspondences. In 1765, a secretive group of American patriots known as the Sons of Liberty organized a very public demonstration to protest the law, and they chose that elm tree as their meeting spot -- earning it the name 'Liberty Tree'. 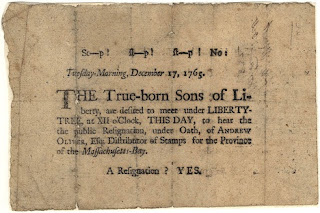 In the months that followed, as pre-revolution angst grew, the Liberty Tree continued to be used as a gathering point for dissenters in Boston, until the tree itself became symbolic of their struggle.

Inspired by that humble tree which had become emblematic of freedom, new Liberty Trees came to be designated across the original colonies as places for early advocates of independence to meet. Indeed, the revolutionary ideals of those in attendance at such gatherings, like Samuel Adams, Paul Revere, John Hancock and Patrick Henry, were very likely born in the shade of an elm.

So potent was that original Liberty Tree as symbol of independence, it was targeted by the opposition in the opening battles of the Revolutionary War. In 1775, a group of Loyalists chopped down the old tree and used it for firewood. This only served to stoke the passions of early patriots who soon adorned their flags with an image of that tree.

But hear, O ye swains, 'tis a tale most profane,
How all the tyrannical powers,
Kings, Commons and Lords, are uniting amain,
To cut down this guardian of ours;


From the east to the west blow the trumpet to arms,
Through the land let the sound of it flee,
Let the far and the near, all unite with a cheer,
In defense of our Liberty Tree.

Nowadays, in a nation made free with the help of an elm, the Liberty Tree continues to be an emblem of patriotism, even if the story of the original specimen has been somewhat lost in metaphor. On a street in Boston, a simple bronze plaque marks the spot where the Liberty Tree grew as the stage for revolution, though its roots still hold firm, even if unseen, in the American psyche.

In light of history and the ideals laid out in the Declaration of Independence, trees in particular just may be a more fitting monument to tennets of democracy than the Liberty Bell, Independence Hall, or any such site -- for they are as stoic and timeless as our inalienable rights. It's a wonder then that shooting fireworks, not planting trees, became Independence Day tradition. After all, bombs bursting in air may have won us our liberty once, but freedom can still be found in the shade of an elm.