A 1955 British Cycling Film Shows the Joys of Countryside Touring 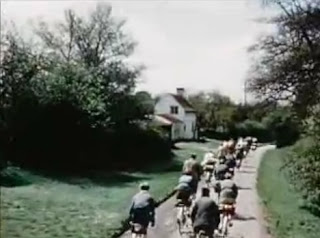 TreeHugger does a lot of work to promote urban cycling, a major step towards developing sustainable cities. But lest we forget how great a day in the countryside on two wheels can be, this short film from 1955 is the perfect reminder. Produced by British Transport Films, "Cyclists Special" follows a group bicycle tour as members of the Cyclist Touring Club take the train out of London and spend what looks like the nicest day ever. And it's worth watching for the 1950s English slang alone.

The train the tour uses to get out of the city is equipped with special comparments, outfitted with rubber covered hooks to hang the bikes safely: "the way to carry bicycles by train." They head to Rugby, split into groups (so no one gets "the hump" from being at the back of a large group) follow their tour guides through Warwickshire, Leicestershire and Northamptonshire, and visit Kenilworth Castle, Stratford-upon-Avon and the site of the Battle of Naseby.

When one person gets a flat tire, the whole group stops to help him fix it, though he may "get a ragging." They stop for a communal lunch to avoid the "bonk" (hunger-caused fatigue). With no cars in sight, everyone goes at their own pace, and no one "splits their britches trying to keep up."

The narrator tells us that the trip brings together "people of all ages, ranks and stations, who rediscover their common humanity in finding countryside, exercise and companionship, all in one." It's a big claim but not an outrageous one: cycling tours are a great way to bring people together, and that's as true today as it was in 1955.