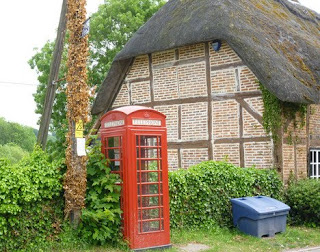 from TreeHugger.com
by Bonnie Alter, London

We have already written about the recycling of the distinctive red telephone booths in England. With everyone using cell phones, the evocative boxes have become redundant and the phone company is selling them off to local communities.

Imagine our delight, whilst meandering through the pastoral roads of Hampshire, to come across this picture-perfect example at a crossroads of a small village.

Exquisitely located beside a thatched roof cottage and across the street from an old church and graveyard, it was like a calendar picture of olde England.

The sign on the wall explained that BT (British Telecom) no longer operates the kiosk and it is now owned and operated by the local authority. In this case it is Longstock Parish Council. 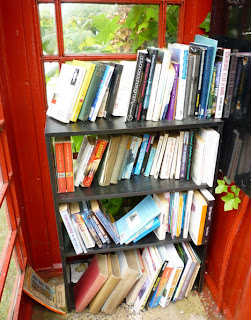 It has become a small lending library for the local community. Inside the booth was an assortment of books, reflecting the eclectic reading interests of the local villagers. There was Tom Clancy for the low-brows and Margaret Forster and Hanif Kureshi for the high-brows. The Girl with the Golden Tattoo for good summer reading and the Barbecue Bible for the cooks. Charmingly, or should that be naturally, some vines were growing through the wall, into the room.

The first incarnation of the red phone box was designed by architect Sir Giles Gilbert Scott for a competition in 1924. This design, the K2, was introduced in 1926, predominately in London. Ten years later Scott refined his design and the famous K6 or 'Jubilee Kiosk' was introduced nationwide to celebrate George V's Silver Jubilee... read more story at TreeHugger.com