How Does A Building Get To It's Hundredth Birthday? A Look at Fenway Park 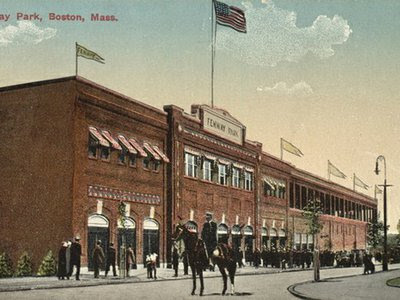 I am not a baseball fan, and I have never been to Fenway Park. But I do love old buildings, and believe that we have a lot to learn from them about how to design new buildings. It isn't often that buildings get birthday parties even when they last a century; when my editor said "you can take your kid there and feel like you're having the same experience your dad did when his dad took him" I agreed to take a look.

When discussing why buildings last, I often fall back on the criteria established by Steve Mouzon of the Original Green:

Many baseball stadia are lovable, and that hasn't saved them from demolition. But Fenway appears to be particularly loved; a Red Sox historian is quoted:

Fenway Park "just has this mystique, this closeness," Dick Bresciani, a Red Sox vice president and team historian, told The Times' Kevin Baxter in an interview at the ballpark last year. "Everybody's close to the action with very little foul ground, so it's almost like you're involved," he said. "The excitement that's generated when you come in here and you're part of this whole environment."

It was built to last, and survived through quite a few years of poor maintenance and was at significant risk. According to CBS,

"in 1999, the iconic park was nearly lost. Fenway's age was showing and the Red Sox pushed to tear it down and start over. Instead, new owners invested almost $300 million in renovations, including 274 new seats above the Green Monster." You can read all about it in an old website, Save Fenway Park, that lives on. Moreover, the trend at the time was to go post-modern retro and replicate features of old stadium design. One sportswriter wrote: “Let me get this straight. We’re bulldozing real vintage ballparks like Tiger Stadium and Fenway Park to put up fake vintage ballparks?”

Accessible Places are those where you have a choice of how to get around. If you can choose to drive, walk, bike, or take the train, then you can do what makes the most sense. If you can only drive, then you have no choice, nor do any of the other people clogging the highway ahead of you.

Fenway park is urban. You can get to it easily. It is hard to park a car there, so people don't drive. Progressive Field in Cleveland has been getting a lot of press lately for putting a wind turbine on its roof, but what's really green is being able to walk or take a streetcar or subway to the stadium.

Serviceable places are those that provide the basic services of life within walking distance, so that driving is a choice, not a necessary act of survival. Serviceable places also have places for the people that serve you, like firefighters, police, and teachers, either somewhere in the neighborhood or in nearby neighborhoods so that their daily commute can be a walk or a bike ride if they choose, rather than the 50-mile drive they currently have to endure in many increasingly unaffordable places across the country.

Any building that gets to be a hundred deserves a bit of notice. Fenway Park demonstrates that you don't have to knock down a beloved building just to squeeze in a few more boxes for the 1%, but that you can fix what you've got even if the seats are tight. That you can stay downtown even if there is no parking. That new isn't always better.