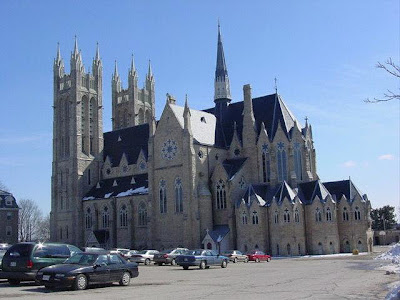 Guelph's Church of Our Lady Immaculate
photo credit: fadedgenes/via Flickr
TORONTO, April 3, 2012 /Canada NewsWire/ - The 2012 Doors Open Ontario season kicks off in Guelph on April 28. Fifty-seven events across the province comprise this year's program. From April until October, heritage buildings, cultural sites and other interesting venues will be open - free of charge - for public viewing.

The theme for Doors Open 2012, "Defending a nation," commemorates the bicentennial of the War of 1812 and the locations, events and persons connected to the defence of our province and country. Doors Open participants will uncover the stories of early inhabitants who faced invasion during the War of 1812 and learn about other heroic war efforts from the past 200 years. A diverse range of defence-related sites will be open to visitors, such as battlefields, military fortifications, armouries, armament manufacturing facilities, legion halls, commemorative monuments and peace gardens.

Doors Open Ontario is the province's most exciting heritage tourism program. Since its launch in 2002, it has grown from 17 events to a record 57, representing hundreds of communities and thousands of individual heritage sites. When the 2012 events conclude in October, the program will have generated more than 4.5 million visits to 5,000 sites across the province. Out-of-town visitors will have spent an estimated $23 million in Ontario's communities.

Trails Open Ontario, part of the Doors Open program, encourages visitors to explore Ontario's 88,000 kilometres of walking, hiking and cycling trails. Participating trails can be discovered in the Doors Open Guide and on the Doors Open website. Call 1-800-ONTARIO (1-800-668-2746) for a free copy of the guide.

Doors Open Ontario 2012 sponsors include: the Globe and Mail, the Ministry of Tourism, Culture and Sport, the Ontario Tourism Marketing Partnership Corporation, the Ontario Cultural Attractions Fund and the participating communities.
The Ontario Heritage Trust is an agency of the Government of Ontario dedicated to identifying, preserving, protecting and promoting Ontario's heritage for present and future generations.

Below is the Doors Open Ontario 2012 calendar of events. Visit www.doorsopenontario.on.ca for more information about each community