30th Anniversary of the Proclamation of the Constitution Act of 1982 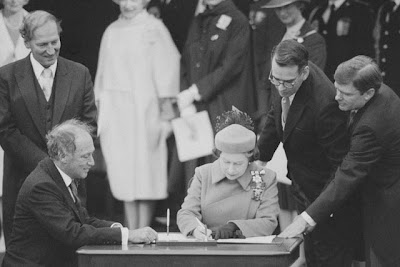 OTTAWA, April 17, 2012 /Canada NewsWire/ - Today marks the 30th Anniversary of the Proclamation of the Constitution Act of 1982, which was formally signed by Her Majesty Queen Elizabeth II on April 17, 1982, in the presence of tens of thousands of Canadians on Parliament Hill in Ottawa.

This anniversary marks an important step in the development of Canada's human rights policy. Building on Diefenbaker's Canadian Bill of Rights of 1960, the Constitution Act of 1982 enshrined certain rights and freedoms that had historically been at the heart of Canadian society into a constitutional document known as the Charter of Rights and Freedoms.

The Constitution Act of 1982 empowered our government to amend every part of Canada's constitution, for the very first time.

As we look ahead to Canada's 150th Anniversary in 2017, we encourage all Canadians to commemorate the milestones that have built our nation and made us the great country we are today.