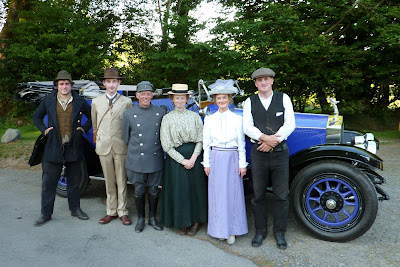 TORONTO, January 6, 2012 /Canada NewsWire/ - This February, join TVO as we invite viewers into the world of inspiring new documentaries, hard-hitting dramas, and help us celebrate Black History Month with informative programming. Highlights include:

...World premiere of the TVO-commissioned documentary Lone Twin exploring the moving world of twins, and what happens after one passes away

...North American premiere of Attenborough and the Giant Egg brings the world-famous naturalist back to Africa, and face-to-face with the egg of the biggest bird that ever lived.

...North American premieres of new documentaries and dramas, including Edwardian Farm, The Ball, One Kiss Could Kill Him, and The Jury Series II.

The creators of Victorian Farm return to uncover the lost world of the Edwardian "Working Countryside" in a scale and scope never before seen. For a full year, historian Ruth Goodman and her team bring Morwellham Farm back to life. Reflecting the traditional life and entrepreneurial spirit of the era, the team expands their horizons to explore a vibrant and diverse community where farming, market gardening, mining and fishing came together.

This February, join TVO as we celebrate Black History Month in Ontario.

On Friday February 3, at 10 pm, Allan Gregg in Conversation welcomes Georges Laraque, former NHL enforcer and author of a new memoir, as he talks about the racism he faced in the rink as a child and gives his insider's take on fighting in hockey.

Documentaries include, The Lost Libraries of Timbuktu on Monday February 6 at 10 pm, in which filmmakers travel to discover Africa's oldest literature and find out why its preservation matters. A Walk to Beautiful on Sunday February 19 at 8 pm tells the stories of five Ethiopian women who suffer from devastating childbirth injuries and make the spiritual journey to reclaim their lost dignity. And The Little Black School House on Sunday February 26 at 8 pm explores the little-known history and experience of the children, women and men who studied and taught at all-black, segregated schools in Canada in the 1960s.

TVOKids relaunches the Time Trackers series with the story of Harriet Tubman.

TVO is Ontario's public educational media organization and a trusted source of interactive educational content that informs, inspires and stimulates curiosity and thought. TVO's vision is to empower people to be engaged citizens of Ontario through educational media. TVO is funded primarily by the Province of Ontario. As a registered charity, TVO depends on the support of its sponsors and individual donors. For more information, visit tvo.org