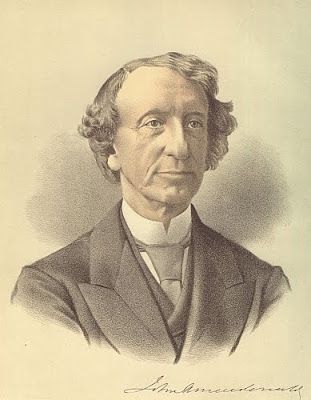 WEST VANCOUVER, January 11, 2012 /Canada NewsWire/ - Today the Honourable James Moore, Minister of Canadian Heritage and Official Languages, invited all Canadians to reflect on Sir John A. Macdonald's life and accomplishments, in honour of the 197th anniversary of his birth. Minister Moore spoke to students while attending an event at Caulfeild Elementary School in West Vancouver. Today's event was organized in partnership with the Historica-Dominion Institute to showcase how classrooms across Canada can celebrate the birth of Canada's first Prime Minister.

"Our Government received a strong mandate to support and celebrate important milestones like the birthday of Sir John A. Macdonald, who holds a very distinguished position in Canadian history as our country's first Prime Minister and a Father of Confederation," said Minister Moore. "Our Government is committed to educating all Canadians on the importance of Sir John A. Macdonald's defining role in our history, by celebrating his life and accomplishments and how they have shaped the Canada we know today."

"We are thrilled to be in Vancouver to celebrate Sir John A. Macdonald Day with schools in British Columbia and across Canada," said Jeremy Diamond, Director at the Historica-Dominion Institute. "The life and times of Canada's first Prime Minister, and founding father, teach us a great deal about the origins of our country and how that history may live on in the present."

Thanks to an investment by the Government of Canada, the Historica-Dominion Institute launched a major educational campaign during the 2010-2011 and 2011-2012 school years, to encourage schools across Canada to organize their own Sir John A. Macdonald Day celebrations on January 11.

This commemoration is just one of a series of events that will continue to bring Canadians together in the years to come. Upcoming commemorations include the following:

...the 200th birthday of Georges Etienne Cartier and the 150th anniversary of the Charlottetown/Québec Conference (2014)

The Government of Canada is providing funding of $263,250 through the Commemorate Canada component of the Department of Canadian Heritage's Celebration and Commemoration Program. This component provides financial support to initiatives of national significance that commemorate various aspects of Canadian history.