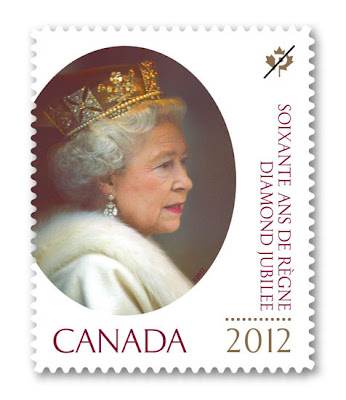 Overall, seven stamps to be issued in 2012 to commemorate the event

OTTAWA, January 16, 2012 /Canada NewsWire/ - This morning, surrounded by approximately 50 children from two area schools, His Excellency the Right Honourable David Johnston, Governor General of Canada, accompanied by the Honourable Marjory LeBreton, Leader of the Government in the Senate, and Deepak Chopra, President and CEO of Canada Post unveiled Canada's postal tribute in honour of the Diamond Jubilee at the Museum of Civilization, home to the National Postal Museum.

The official Diamond Jubilee stamp available today in all post offices across the country features a cameo of a photograph of Her Majesty in her royal robes and tiara, waving from the window of a carriage. Also available today is the first of six Diamond Jubilee mini-panes of four stamps issued as part of a limited edition keepsake folder. Each keepsake folder—six in total, one for each ten-year period in The Queen's reign—houses a mini-pane of four stamps, an informative booklet pertaining to that period, plus a postcard featuring all the stamps bearing Queen Elizabeth II's image issued during each respective ten-year timeframe.

A final stamp issue will feature an engraved stamp with two portraits of The Queen, a design inspired by the famous Canadian stamp issued, in 1897, for Queen Victoria's Diamond Jubilee. Collectors still speak glowingly of the 1897 stamp.

"We have witnessed Her Majesty The Queen's wise leadership throughout her remarkable 60-year reign," said His Excellency the Right Honourable David Johnston, Governor General of Canada. "It is fitting that Canada Post continues in the tradition of honouring Her Majesty The Queen with these new stamps. It is a wonderful tribute."

"Canadians recognize not simply the importance of Her Majesty's position in our constitutional monarchy, but the steadfast devotion she has demonstrated over six decades," said Minister LeBreton. "These stamps are a fitting tribute."


"Only once before, with Queen Victoria in 1897, have we had the opportunity to celebrate a royal event as significant and historic as Queen Elizabeth II's Diamond Jubilee," said Deepak Chopra, President and CEO of Canada Post. "We have created stamps that both celebrate and make history."

Diamond Jubilee issues - except for the engraved stamp-were designed by Gottschalk + Ash International and developed with the co-operation of both Rideau Hall and Buckingham Palace, as were all stamp materials bearing an image of The Queen.