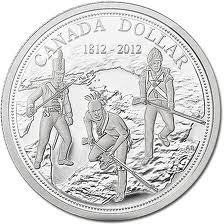 OTTAWA, January 17, 2012 /Canada NewsWire/ - The Royal Canadian Mint is proud to announce that its first collector coin of the year, the 2012 Proof Silver Dollar, is dedicated to celebrating the 200th anniversary of the War of 1812. This cornerstone of the Mint's annual collector coin program remembers a conflict which united English, French and First Nations forces in defending the borders and values of a future Canada and also ushered two centuries of peace between Canada and the United States.

"The Royal Canadian Mint is proud to celebrate Canada's history, culture and values through beautifully crafted collector coins and we are delighted that our 2012 Proof Silver Dollar honouring the bicentennial of the War of 1812 captures one of the most pivotal moments in Canadian history," said Ian E. Bennett, President and CEO of the Royal Canadian Mint. "Canadians far and wide can collect this coin as a memento of their history and the Mint looks forward to continue celebrating this milestone anniversary with many more coins to follow"

"Honouring the bicentennial of the War of 1812 with this special collector coin pays tribute to some of our greatest national heroes and a crucial moment on the road to Canadian nationhood," said the Honourable Jim Flaherty, Minister of Finance and Minister responsible for the Royal Canadian Mint. "The Government of Canada encourages Canadians to take the unprecedented opportunity in 2012 to learn more about our history and take pride in our traditions".

Limited to a mintage of 40,000, the 2012 Proof Silver Dollar is produced with 99.99% pure silver and is available for $59.95 CDN. The Mint is also offering a Brilliant version of the Proof Silver Dollar as well as two types of proof sets featuring the coin (Please see attached backgrounder for further information).

All of these coins can be ordered today by directly contacting the Royal Canadian Mint at 1-800-267-1871 in Canada, 1-800-268-6468 in the US, or on the Internet at www.mint.ca. Starting January 23, 2012, these coins will also be available at the Royal Canadian Mint's boutiques in Ottawa, Winnipeg and Vancouver as well as through the Mint's global network of dealers and distributors, including participating Canada Post outlets.

The Royal Canadian Mint is the Crown Corporation responsible for the minting and distribution of Canada's circulation coins. An ISO 9001-2008 certified company, the Mint is recognized as one of the largest and most versatile mints in the world, offering a wide range of specialized, high quality coinage products and related services on an international scale. For more information on the Mint, its products and services, visit www.mint.ca