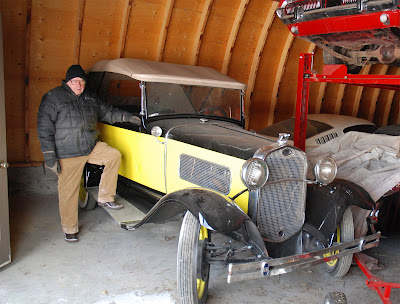 OLDS, Alberta, January 18, 2012 /Canada NewsWire/ - Calgary area businessman and rancher J. C. (Jack) Anderson will be donating the proceeds from the sale of his collection of 100 vintage cars and trucks to Olds College during its 2013 Centennial year.

Planning for the "100 Cars and Trucks For Our 100th Year" auction is underway. Mr. Anderson's prized collection will be auctioned off in a very public and celebratory auction that will be a cornerstone event of the Olds College Centennial year.

"Jack has, again, given us a remarkably incredible gift. It's not just the seven figure cash donation that will flow from the auction, but the auction itself has amazing potential to shine an enormous spotlight on our college as we celebrate 100 years of education excellence. We are beyond grateful."

Mr. Anderson will allow the College to decide how to best use the proceeds from the vehicles auction, but it is likely that the College's next capital building campaign and the year-long Centennial celebration will be beneficiaries. The Centennial year will actively engage the college's alumni, industry stakeholders, donors, the community, the province and international guests. Mr. Anderson gifted Olds College $1 million in 2007, without restrictions on its use. The vintage vehicles donation is made with similar freedom of discretion by the College and its Board of Governors.

"The word 'transformational' is often used in the world of philanthropy; perhaps so much so that its descriptive impact has been reduced. Let me say, then, that Jack's gift, and his cumulative impact are of the lump-in-my-throat, eye-moistening, lip-quivering variety. I'll remember that moment in Jack's living room where he first made this gesture, with his two black Labradors jumping all over me, as long as I live."

Founded in 1913, Olds College's vision is to be the premier Canadian integrated learning and applied research community specializing in agriculture, horticulture, land and environmental management. Located 45 minutes north of Calgary, Olds College prepares students to contribute provincially, nationally and internationally through careers in agriculture, horticulture, environmental land management, agribusiness, and rural entrepreneurship. Olds College provides certificate, diploma and applied degree programs, and participates with other institutions in offering post-diploma degrees. Olds College is further dedicated to nurturing innovation, learning, applied research and commercialization for agribusiness through the School of Innovation. 2013 marks the College's Centennial Anniversary, closely following notable recent accomplishments including the opening of the Shirley McClellan Riding Arena and the launch of the Canadian Institute for Rural Entrepreneurship.