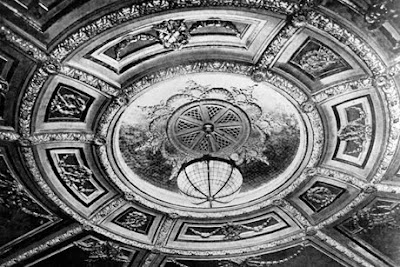 Illuminating the past and lighting the future

The elegant Tiffany-style - unique to its era - chandelier not only illuminated the theatre, but also highlighted the gold-leaf plaster motifs of musical instruments that decorate the dome. The bowl was fabricated with stunning amber coloured stained glass jewels strung together with brass trim. The OHT, together with local artisans and craftspeople, will recreate the original chandelier. This work will commence in the fall.

"Recreating the EWG's chandelier is a fitting way to honour the many artisans, craftspeople and volunteers who meticulously restored the two theatres 25 years ago. We are delighted that the chandelier will be the focal point of the Theatre Centre's 100th anniversary commemoration in 2013, highlighting this important part of the province's heritage." - Professor Thomas H. B. Symons, Chairman, Ontario Heritage Trust

"When the Elgin chandelier went missing in 1935 during one of the theatre's many renovations, it left us with lighting challenges that we will finally resolve in 2013. We have heard some anecdotal stories about where the original chandelier could be, from it travelling to Europe to it being dismantled and melted down." - Brett Randall, General Manager, Elgin and Winter Garden Theatre Centre

...In celebration of the 100th anniversary of the theatres, the Elgin and Winter Garden Theatre Centre will host a number of events and activities throughout 2013, including lunchtime concerts, art and historic exhibitions, lecture series, special tours and an open house.

...Constructed in 1913 by American theatre impresario Marcus Loew, the Elgin and Winter Garden Theatre acted as the Canadian flagship for his chain of vaudeville theatres. It was the only double-decker theatre built in Canada, and today is the last operating double decker theatre in the world.

Find out more about the Chandelier Project. www.heritagetrust.on.ca/ewg