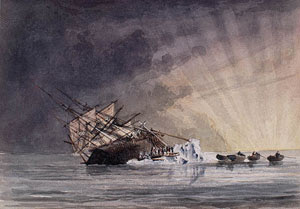 Parks Canada - August 23, 2012 - The Government of Canada is committed to promoting an understanding and awareness of Northern history, and preserving the heritage which unites us as Canadians. To this end, on August 22, 2012, Prime Minister Stephen Harper announced the 2012 Franklin Expedition, a new project to continue the search for the ill-fated 1845-46 Franklin Expedition vessels: the HMS Erebus and HMS Terror.

The two lost ships, HMS Erebus and HMS Terror, are together designated as a national historic site of Canada – the only such “undiscovered” national historic site. Locating these shipwrecks, or their contents, offers unprecedented information on the search for the Northwest Passage, the exploration of Canada’s North and the fate of Sir John Franklin. HMS Erebus, HMS Terror and their crew are also a testament to Canada and Great Britain’s shared history. HMS Erebus and HMS Terror also have historical and cultural significance for local Inuit who speak of the ships in their oral history. It is believed that Inuit oral history and research could hold the key to the ultimate discovery of the lost vessels.

Locating HMS Erebus and HMS Terror continues to prove very challenging due to the vastness of the Canadian Arctic and the harsh conditions frequently encountered in northern waters. It is also complicated by differing accounts of the fate of Franklin’s ships as preserved in Inuit traditional knowledge, and the many interpretations given to these accounts on the possible resting place of the wrecks. A number of attempts to locate HMS Erebus and HMS Terror have been unsuccessful to date, but an increasing area of the seafloor has been systematically ruled out, thus narrowing the search.

The 2012 Franklin Expedition is led by Parks Canada under the National Historic Sites Directorate and the Underwater Archaeology Services program. The expedition, which is expected to take between 4-6 weeks, will cost approximately $275,000. The opportunity to partner with so many other organizations enables the Government of Canada to carry out the operations at minimal costs.

The 2012 Expedition is a continuation of Parks Canada’s Underwater Archaeology Service surveys conducted in 2008, 2010 and 2011.

Weather and ice conditions permitting, the search areas will include both the O’Reilly Island area, west of the Adelaide Peninsula and where Inuit oral tradition places one of the shipwrecks, and further north to Victoria Strait and Alexandra Strait, where the other vessel is believed to be located.

The 2012 Franklin Expedition includes the participation of a new private partner – the Arctic Research Foundation – and with the continued support from the Government of Nunavut, Fisheries and Oceans Canada’s Canadian Hydrographic Service and the Canadian Coast Guard, Environment Canada’s Canadian Ice Service and Wildlife and Landscape Science, the Canadian Space Agency and the University of Victoria Ocean Technology Laboratory. Parks Canada is also partnering with the Canadian Broadcasting Corporation to bring this important story in Canadian history to the public.

The main technologies being used include side-scan sonar and multi-beam bathymetry, which have also been employed to chart a large portion of the Canadian Arctic Archipelago during past Canadian missions, including those to find the Franklin shipwrecks. The search will also benefit from the use of LiDAR, an air-borne technology used to acquire bathymetric data in shallow waters, satellite imagery, and an autonomous underwater vehicle (AUV), equipped with similar remote-sensing equipment, supplied by the University of Victoria.

The Government of Canada is the proud steward of HMS Erebus and HMS Terror National Historic Site of Canada, and is working with the Government of Nunavut and Qikiqtani Inuit Association towards the creation of a national marine conservation area in Lancaster Sound at the eastern entrance to the Northwest Passage.

This document is also available in Inuktitut at http://pm.gc.ca/grfx/docs/20120823_BG.pdf