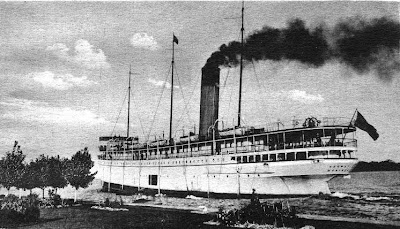 The agreement follows four years of negotiation to relocate S.S. Keewatin from Saugatuck, Mich., where she has been docked since 1967, after being purchased by the Peterson family and converted into a maritime museum. The Edwardian-era vessel, launched July 6, 1907, was retired in 1966 after spending almost 60 seasons ferrying passengers from Port McNicoll on Georgian Bay, to Port Arthur (Thunder Bay) on Lake Superior.

"We are thrilled to return the world's last Edwardian passenger steamship to the people of Tay Township and Canada," said Skyline chairman and president Gil Blutrich. "As a passionate maritime history enthusiast, I became interested in the Keewatin's remarkable history, its preservation and importance to this beautiful part of the country decades ago. I believe the Keewatin will deliver both tourism dollars and wonderful memories to the community for years to come."

The ship was purchased by Skyline Development and will be donated to the R.J. and Diane Peterson Great Lakes and S.S. Keewatin Foundation, which will operate and maintain the vessel as a maritime museum. The Keewatin will be moored in a new waterfront park in Port McNicoll—mere steps from the original location where it was originally tied. The park will feature a replica of the town's original train station and surrounding English Royal gardens.

"The Keewatin truly is one of a kind," said Eric Conroy, author of the book A Steak In the Drawer, which details his experiences working on the Keewatin as a 17-year-old. Conroy, a long-time Keewatin volunteer who worked alongside Blutrich to negotiate her repatriation, will chair the R.J. and Diane Peterson Great Lakes and S.S. Keewatin Foundation. "This announcement is particularly important for me because it brings my earliest memories of the Keewatin full circle. There are many people in our community who have a decades-long connection to Keewatin and wish to share that passion with their children. My focus now is on building a cross-generational volunteer organization to ensure this Edwardian treasure remains an important part of our lives."

Tay Township mayor Scott Warnock is confident the vessel will become one of the area's most important tourist attractions.

"Once this plan is fully approved by council, we feel the S.S. Keewatin and the planned park development on Port McNicoll's waterfront could attract hundreds of thousand of tourists each year," he said. "While she spent most of her life transporting passengers and cargo to ports across the Great Lakes, Keewatin is now poised to deliver major economic and cultural benefits to Tay Township and the entire region."

Dredging of the Kalamazoo River—funded by the R.J. and Diane Peterson Great Lakes and S.S. Keewatin Foundation—is currently underway to allow the vessel to be towed to the mouth of Lake Michigan, where Blutrich will meet Peterson in June, 2012, to officially hand over the vessel. From there, S.S. Keewatin will be towed to its home in Port McNicoll where restoration work will be completed to return the ship to her original early 20th century grandeur.

Built by the Fairfield Shipbuilding and Engineering Company in Scotland as Hull No. 453, the Keewatin, along with her sister ship S.S. Assiniboia, were the first Great Lakes ships to boast radar. The 350-foot long Keewatin carried 288 passengers with a crew of 86, and cruised at a top speed of 14 knots.

Constructed five years before the ill-fated voyage of RMS Titanic, Keewatin features many of the same design and construction features of her ill-fated cousin including a quadruple expansion steam engine and "Scottish" boilers, as well as a grand staircase, Edwardian dining saloon, hand painted Italian glass and oak trim throughout. Strict fire codes and faster modes of transportation made the wood-cabined vessel largely obsolete by the mid-1960s.

Skyline is a leader in the operation and development of hospitality resorts and destination communities in downtown Toronto and across some of Ontario's most important resort regions including Simcoe County, Georgian Bay and the Muskokas. Founded by visionary entrepreneur Gil Blutrich in 1998, Skyline boasts a surging asset base that has grown from $26 million to $245 million in little more than a decade. The company employs a staff of 1,500 and has more than 1,052 hectares of land and 1,000 rooms and suites in its holdings, including premiere resort and destination communities such as Port McNicoll near Midland, Ont., Deerhurst Resort and Horseshoe Resort. Skyline's unique urban asset mix includes Toronto's boutique Pantages and Cosmopolitan Hotels, as well as the iconic Le Meridien King Edward Hotel—a partnership between Dundee Realty Corp., developer Alex Shnaider, Skyline International Development Inc., and Serruya Realty Group Inc. Skylife, the company's innovative lifestyle program, provides its resort community residents and members with unlimited access to activities such as golf and skiing, as well as discounts on spa services and hotel rooms in Canada and around the world. For more information, visit www.skylineinvestments.com