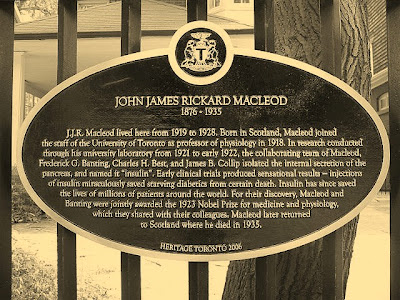 OTTAWA, October 19, 2011 /Canada NewsWire/ - When it comes to health care and health research, Canadians have much to be proud of. We have an incredibly rich history of discovery and achievement.

To celebrate those whose extraordinary contributions have made the world a better place, The Canadian Medical Hall of Fame honours a select few every year.

The Canadian Medical Hall of Fame - the only one of its kind in the world - is proud to announce that its 2012 inductees are:


Dr. John James Rickard (J.J.R.) Macleod is now recognized for collaborating in one of the most important breakthroughs in medicine. Known internationally at the time for his research in carbohydrate metabolism and physiology, Dr. Macleod was recruited to the University of Toronto where he directed the research that led to the discovery and clinical use of insulin as an effective therapy for diabetes. Following the breakthrough in 1922, Dr. Macleod shared the 1923 Nobel Prize in Physiology or Medicine with Dr. Frederick Banting.

Terry Fox's run to raise money for cancer research in 1980 is an enduring symbol of the commitment and determination of one individual to find a cure - shared now by millions of people who participate in Terry Fox events all over the world. Today, the Foundation in his name has raised hundreds of millions of dollars. Terry's father and brother, Rolly and Darrell, will accept the Hall of Fame honour at the induction ceremony in Toronto in March.

Dr. Armand Frappier was a driving force in the deadly battle against tuberculosis and in the 1930s became an advocate for full-scale, anti-tuberculosis vaccinations in North America. He founded the first institution dedicated to medical research in Quebec, now known as the INRS-Institut Armand-Frappier. During the polio epidemic of the 1950s, he introduced the Salk vaccine. Dr. Frappier is also recognized for his work in the development of freeze-drying human serum in collaboration with the Department of National Defense and the Canadian Red Cross during WWII.

Recognized worldwide as a giant of respiratory medicine, Dr. Peter T. Macklem's work constitutes the scientific foundation for our ongoing campaign against smoking. Having led a brilliant career at McGill University Health Centre's Royal Victoria Hospital, Dr. Macklem forever changed the face of respiratory medicine by pioneering the study of small airway physiology and identifying the early pulmonary damage caused by smoking, among other contributions.

Dr. John H. Dirks of Toronto has elevated Canadian and international science and education to unprecedented heights. He is perhaps best known for transforming the Gairdner Foundation International Awards, often referred to as 'Canada's Nobel Prizes', into one of the most prestigious awards programs for medical research in the world. In a career now spanning five decades, Dr. Dirks has made huge impacts in every field he has touched, including scientific and academic achievements in nephrology (kidney function and disease).

Raised and currently living in Nova Scotia, Dr. F. Clarke Fraser is an iconic figure in Canadian medicine and was one of the creators of the discipline of medical genetics in North America. He founded the first Canadian medical genetics department in a paediatric hospital, aptly named the F. Clarke Fraser Clinical Genetics Centre at McGill University, in 1995. He also laid the foundations in the field of Genetic Counselling, which has enhanced the lives of patients worldwide.

Dr. Lap-Chee Tsui made what is described as the most significant breakthrough in human genetics in 50 years, namely the discovery of the cystic fibrosis gene. Born in Shanghai, China, and coming to the University of Toronto and the Hospital for Sick Children in the early 1980s, Dr. Tsui has made extraordinary contributions to science through his discoveries and is a leader in developing the field of genomics in Canada and throughout the world.

To help celebrate the occasion of this announcement, over a dozen Hall of Fame laureates from past years were kind enough to share their views on the state of health care and health research in Canada. Their intriguing and insightful comments are summarized in the accompanying document.

The seven inductees announced today will join the ranks of 88 laureates who have been similarly honoured since 1994.

"These individuals have truly made a difference in the lives of Canadians, and indeed, people around the world. They have blazed trails, inspired others to follow, and extended the boundaries of medical knowledge and health care," said Dr. Cecil Rorabeck, Board Chair of the Hall of Fame. "We are in their debt, and we honour them for their great service to humankind."

The 2012 Induction Ceremony, presented by BMO Harris Private Banking, will be held for the first time in Toronto on March 21. Over 500 of Canada's leading citizens will join honourary chair Dr. David Naylor, University of Toronto President, committee chairs Dr. Catharine Whiteside, Dean of the Faculty of Medicine at the University of Toronto, and Dr. Mark Poznansky, President and CEO of Ontario Genomics Institute, and other distinguished guests for an evening of inspiration and celebration.

Biographies of the inductees are available at http://www.cdnmedhall.org/induction

About The Canadian Medical Hall of Fame

BMO Harris Private Banking is a team of remarkably talented and passionate professionals with diverse expertise who are dedicated to creating a profound impact on the lives of their clients. Backed by the heritage, stability and resources of BMO Financial Group, professionals at BMO Harris Private Banking are responsible for the successful management of wealth by providing expert advice and highly personalized services in banking, investment management, estate, trust, succession planning and philanthropic services - all in a coordinated and confident approach. BMO Harris Private Banking challenges successful Canadian families to take action on what's important to drive exceptional outcomes and make the most of the opportunities wealth provides.