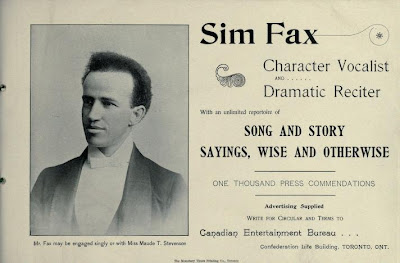 TORONTO, September 1, 2011 /Canada NewsWire/ - According to a new national survey, most Canadians dream of becoming doctors, entertainers or professional athletes. But dreams don't always come true. From shrimp peelers and pig nurses to barn poop cleaners and thieves, Ancestry.ca, Canada's leading family history website1, takes a look at some of the strangest jobs from our past and present.

More than 1,100 Canadians were asked to list their dream job and the worst job they've ever had, and the results were intriguing, if not often confusing. Among the worst jobs were variations on the farm hand theme, which included "poop barn cleaner," "cleaner of the horse barn" and a job title that allows the imagination to run wild - "intensive livestock operations."

There were also several entries related to the canning of fish in factories, including one individual with a niche skill of "peeling shrimp." Interestingly, there were repeated entries for "daycare" and "babysitting" as the worst jobs Canadians have ever had, and even one entry for something that many will agree is hard work, though not technically a job - "marriage."

In terms of dream jobs, it was a close race between "author" and "doctor," both listed by 11 per cent of the respondents as their dream job. Those were followed by "musician" (10 per cent), "actor" (eight per cent) and "professional athlete" (seven per cent) rounding out the top five dream careers. Some of the more interesting dream jobs included "lighthouse keeper," "shepherd," "thief" and "dolphin trainer."

Delving through the world's largest collection of online historical records at Ancestry.ca, including national censuses and immigration collections, one can find that Canadians have always held some unique professions, though many of these jobs would be best to leave off of a CV:

...Pig Nurse - Mary Brown, a 26-year-old Toronto resident, is listed in the 1901 Census as a pig nurse, which would appear to be a very rare specialty of the veterinarian family of medicine.

...Lunatic Keeper - John Corbett has the distinction of being Canada's only official 'Lunatic keeper', according to the 1901 Census. John, a 48-year-old, lived in Saint John, New Brunswick.

...Idiot - Neither politically correct or technically even an occupation, the Canadian censuses list three people as 'Idiots', meaning they were patients in Asylums.

...Beggar - Canada had nearly 40 people officially claiming to be professional 'Beggars' between 1851 and 1916, including poor Mary Munroe, a 25-year-old Baptist living in Yarmouth, Nova Scotia.

The lure to Canada's Wild West during the late 1800s is evident with more than 30,000 individuals reporting their occupation as 'Saloon Keeper'. There was also a significant number of 'Cattle Herders', 'Horse Dealers', and more than 8,000 'Stable Boys'.

Looking at historical immigration records like the Canadian Passenger Lists: 1865-1935, one can see that Canada's early settlers were made up primarily of those seeking a better way of life in a new land. The work they did helped shape the fibre of a young nation.

The opening of Canada's west in the late 1800s drew large numbers of German immigrants, mostly farmers. The farmers, used to the harsh conditions of farming in Eastern Europe, were some of the most successful in adapting to the Canadian prairies.

In 1895, following reports of the vast amounts of free land available in the new world, Joseph Oleskiw - a professor of agriculture in the Ukraine - published a pamphlet, About the Free Lands, advertising Canada as the most suitable country for settlement. While the exact numbers remain unknown, it is estimated that between the mid-1870s and 1914 170,000 Ukrainians settled in Canada, mainly as farmers

The first Chinese to settle in Canada were a small group of 50 artisans. They'd been contracted by Captain John Meares in 1788 to set up a trading post of otter pelts on Vancouver Island. It wasn't until 1858 that the next wave of Chinese came to Canada, pulled by the lure of the gold rush in the Fraser River Valley. In the 1870's and 1880's they were followed by another wave of young peasant migrants who came to build the Canadian Pacific Railway through the Rockies.

"For many people throughout history, occupations and careers really helped to define who they were and what they stood for as individuals and within the context of the society in which they lived. Understanding what our ancestors did for a living can reveal a great deal about the type of people they were and can provide a glimpse into what kind of life they may have experienced," said Roger Dunbar, Managing Director for Ancestry.ca.


To find out what your ancestors did for a living, visit www.ancestry.ca.

Ancestry.ca was launched in January 2006 and belongs to the global network of Ancestry websites (wholly owned by Ancestry.com Operations Inc.), which hosts seven billion records. To date, more than 26 million family trees have been created and 2.6 billion profiles and 65 million photographs and stories uploaded. (July 29, 2011).