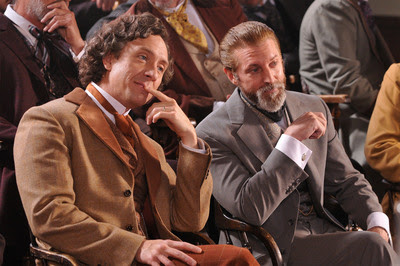 JOHN A: Birth of a Country lays bare the passionate, titanic struggle between Macdonald, the charismatic leader of the Conservative Party, and his opponent, the fiercely determined Brown, leader of what would become the Liberal Party and founder of Toronto's Globe (later the Globe and Mail). Both men were fired by dramatically differing visions of this country...and a deep hatred for each other.

The time period of the film is 1856 to 1864. The English in Upper Canada (later Ontario) are pitted against the French in Lower Canada (later Quebec). It's a dysfunctional situation and the United States eyes the chaos, coveting the idea of annexing a vulnerable land. Britain, meanwhile, has no stomach to fight for us. On this stage, lit by the threat of war and the brutality of abandonment, two men, John A. Macdonald and George Brown, each profoundly committed to his own view of the country, battle to dominate the shape of Canada's future.

It was against this volatile background that Macdonald first takes control of the Conservative Party and makes it the dominant Party of the country by forging a deal with the French. Then, he puts together a plan of action that is so brilliant and audacious that it eventually leads to Confederation and the creation of Canada. His adversary is Liberal George Brown, an ideologue committed to Representation by Population - an idea that plays as both anti-French and anti-Catholic. It is Brown who ultimately makes the biggest personal sacrifice in order for Canada to become a reality as a nation.

The struggle between these two fascinating adversaries centres on many of the key questions that still resonate in Canada 150 years later: What does the military mean to us? How do we define sovereignty? What responsibility do we have to each other?

"I like the fact that Canada is an independent nation," says producer Bernie Zukerman, "and it gives me great pleasure to tell the stories of Canada and celebrate the remarkable men who made this country possible."

Winner of 6 Gemini Awards, producer Bernard Zukerman has made some of Canada's most memorable series and films for television. "JOHN A is a political thriller, the story of personal hatred, public passion and a political poison pill. Only the fire of the conflicting energies of Macdonald and Brown could have created a new country - our country," Zukerman comments. The producer's credits include the award-winning Dieppe, The Sleep Room, Love and Hate and, more recently, Victor: The Victor Davis Story and the series This is Wonderland.

Shawn Doyle (John A. Macdonald) captures the tormented brother Joey on the HBO hit Big Love and the eccentric chess champion on Endgame. Winner of the 2007 Gemini Award for lead actor (The Robber Bride), Doyle co-produced and starred in the independent film Grown Up Movie Star which premiered to critical praise at the 2010 Sundance Film Festival. He has won 3 awards for his critically acclaimed performance as Dennis Langley in The Eleventh Hour and appeared in the series 24 and Desperate Housewives.

Peter Outerbridge (George Brown) is one of television's most compelling leading men whose credits include ReGenesis (for which, playing David Sandstrom, he is a four-time Gemini nominee as Best Actor in a Continuing Series), Murdoch Mysteries, Whistler, 24, Nikita, Monk, Sanctuary, Heartland, Chasing Cain, 100 Days in the Jungle and Flashpoint.

David La Haye (Georges-Étienne Cartier), one of Quebec's most exciting actors, starred in the highly acclaimed film Un crabe dans la tête for which he received the 2002 Genie Award for Best Performance by an Actor in a Leading Role. He has been nominated two other times for Genie Awards as Best Actor as well as twice nominated as Best Actor for the Jutra Award. He is the lead actor in the series Mirador that debuted on Radio-Canada in January 2010.

For additional information online please visit www.johnabirthofacountry.com and the official JOHN A: BIRTH OF A COUNTRY Facebook page.

JOHN A: Birth of a Country is part of the CBC's "75 Days of Programming", a line-up of new and original programs celebrating the CBC's 75th Anniversary. A comprehensive calendar of all anniversary-related programming and events is posted at www.cbc.ca/75