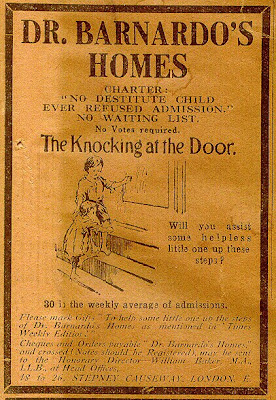 from the The Peterborough Examiner
by KENNEDY GORDON, Examiner Staff Writer
Wednesday September 21, 2011

Many Peterborough residents drive down Barnardo Ave. every day without realizing the origin of the street's name.

"You can ask people, and more and more, people don't know about Dr. Barnardo and the home children," said Ivy Sucee, daughter of a Barnardo home child and founder of the Hazelbrae Barnardo Home Memorial Group.

She has made it her mission for decades to help people learn about the impact and legacy of almost 9,000 children brought to Peterborough in the late 19th and early 20th centuries, children from England given to Canadian families as poverty and war tore through Europe.

That work culminates Sept. 28 with the dedication of a new monument to Peterborough's Barnardo children.

The monument, which was built in Belleville, will face out onto BarnardoAve., she explained.

While the details of its appearance will stay under wraps until the unveiling ("we want it to be a surprise"), she said it reflects the importance of the home children on the community. It will contain 8,914 names collected by the memorial group over several years, Sucee said.

...read the full story at the Peterborough Examiner