Statue of Liberty Pictures: Rare Views, Inside and Out 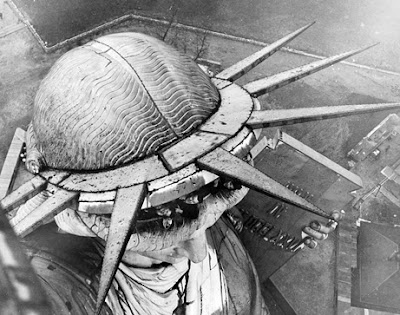 Just a day after her 125th birthday party, the Statue of Liberty will undergo a safety makeover.

Lady Liberty's interior will be closed to visitors starting October 29th, 2011 and the plan is for the interior to reopen after a year.

After the September 11 attacks, the Statue of Liberty monument was closed because rescuers could not get them out in an emergency. After almost $7 million in renovations to fire and security systems the base, pedestal, and observation deck were reopened.

This time, the renovations will cost just over $27 million, and will include safety upgrades to the monument's stairs, elevators, and electrical and mechanical systems. Tourists will still be able to visit Liberty Island and views of the statue will remain "relatively unobstructed" during the renovation.

According to Interior Secretary Ken Salazar, all of these new improvements to the Statue of Liberty will bring "a 19th century icon into the 21st century." Once the renovations are complete, the 3.5 million people who visit the Statue every year will most likely agree.

The first link will take interested users to a piece from the New York Times about the upcoming Statue of Liberty closure.

The second link leads to a story from the June 1986 issue of Popular Science that describes in great detail the huge restoration of the Statue completed between 1984 and 1986.

The third link leads to a short video from the History Channel, deconstructing the Statue of Liberty.

Next, the fourth link leads to an extraordinary set of photos from National Geographic of some rare views of the Statue.

The fifth link will take visitors to a lesson plan from the National Endowment for the Humanities EDSITEment! website. The lesson helps teach students about American attitudes toward immigrants.

Finally, the last link leads to a fine set of curriculum materials from the National Park Service about Ellis Island and the Statue of Liberty.