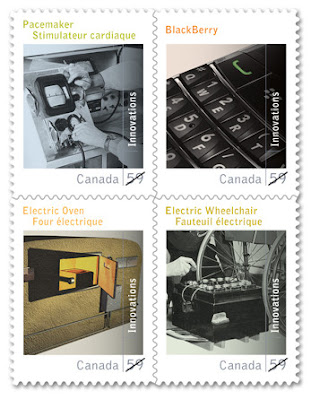 from TreeHugger.com
by Bonnie Alter, London


Canadian inventors are being honoured on a new series of stamps by Canada Post.

And it's a pretty impressive list: the electric oven, the electric wheelchair and the cardiac pacemaker and BlackBerry (!). We're not complaining but only FOUR inventors? Surely there are more...

The inventions have changed and saved lives in Canada and around the world, but always in a typically modest Canadian way, eh?

According to Canada Post, "the world's first electric oven was invented in 1882 by Canadian Thomas Ahearn. It was originally made of brick and was hot enough to "roast an ox". Dr. John Hopps developed the cardiac pacemaker while he was studying hypothermia in 1950, though the first device was much too big to be placed inside the body. The electric wheelchair was created in 1952 by George J. Klein, one of Canada's most prolific inventors, for quadriplegics." And BlackBerry is BlackBerry.

But what about all those other great Canadian inventions, why don't they have a stamp? Why couldn't Canada Post make a series of ten and include some other brilliant Canadian innovations. Like Tim Horton's Donuts and plastic bags, ginger ale and ski-doos?

Check out TreeHugger for 30+ fresh, green stories every day!