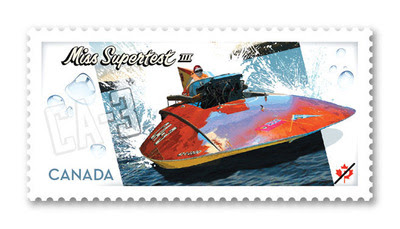 OTTAWA, Aug. 8, 2011 /Canada NewsWire/ - Canada Post today issued a domestic Permanent™ stamp to commemorate the 50th anniversary of the historic victory of the Canadian hydroplane Miss Supertest III. On August 7, 1961, tens of thousands of excited spectators stood on the banks of Lake Ontario at Long Ranch, near Picton, Ontario, as Miss Supertest III made history by capturing the International Harmsworth Trophy for a third time in a row.

"We are delighted to recognize the accomplishments of Miss Supertest III as the first non-U.S. Harmsworth Trophy winner in 39 years," said Jim Phillips, Director of Stamp Services for Canada Post. "People in the Picton area still speak of her accomplishments today."

The triumphant hydroplane was piloted by southwestern Ontario chicken farmer Bob Hayward who captured the prestigious international Harmsworth Trophy in 1959, 1960 and 1961. Miss Supertest III became a powerful example of Canadian ingenuity that still lives on in the hearts of Canadian hydroplane and speedboating enthusiasts.

Designer and speed enthusiast, Ivan Novotny, vice-president at Taylor Sprules Corporation said designing the Miss Supertest III stamps was a dream job. After spending time with the hydroplane's designer, Jim Thompson, Novotny set out to create a design that would pay homage to the speed and power and incredible grace that was Miss Supertest III and her team.

The self-adhesive Miss Supertest III stamp measures 48 mm x 24 mm (horizontal) with simulated perforation and are printed by Lowe-Martin on Tullis Russell paper using lithography in six colours, plus varnish. The official first day cover will be cancelled in Picton, Ontario. The stamps are available in booklets of 8 stamps. The issue also includes a souvenir sheet featuring one domestic PERMANENT™ stamp and one international rate stamp ($1.75), printed using lithography in seven colours, plus varnish.