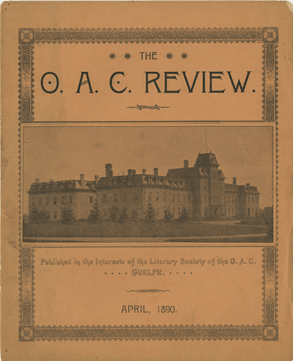 GUELPH, Ontario May 30, 2012 - University of Guelph Library News - Social media makes it possible for us to go back in time and relive past events through photos and videos with the click of a button. Reliving the social events of yesteryear is not always an easy task, but for the Ontario Agricultural College (OAC) and the MacDonald Institute (Mac) grads from 1939-1946, a Library digital collections initiative; the OAC Review Digitization Project, will let them do just that.

The OAC Review is a journal that was published from 1889-1961 with eight issues published per academic year. The OAC Review was truly the “Facebook” of its time and was filled with articles, news items, life announcements, advertisements, and photos that provide a glimpse into what campus life was like in the past. In total, approximately 670 issues were published and to date, all issues from 1939-1946 have been digitized. Going through the digitized versions of the OAC Review is like taking a history lesson with a wealth of juicy social details.

...War time: The first issues were digitized from 1939, during the onset of the Second World War with content focused on the war effort. Advertisements for farming equipment were abundant, describing tractors and plows as “weapons” and “swords”. Students had to find lodgings off-campus and were required to undergo military training. In 1941, the north end of campus was ceded to the Royal Canadian Air Force and converted into RCAF No. 4 Wireless School, transforming Creelman Hall into a mess hall, Johnston Hall into an administration building and barracks, and Johnson Green into a military drilling ground. During World War II, Mac also closed its doors to civilian students in order to provide training to air force chefs for training on food preparation and nutrition and sanitary preservation of their food.

...Traditions: Daisy Chain Ceremony: In 1924, the Mac girls wished to utilize the flowers that grew on campus. They made garlands out of peonies, daisies, and irises and raised them like “crossed swords” through which the graduating class would walk under during the commencement ceremony, and the Daisy Chain Ceremony was born.

...Social /personal details: Student GPAs as well as relationship statuses (who was married or engaged) were published along with articles about campus and student life. Campus visits by British Royalty were also recorded, such as the visit of Princess Alice (granddaughter of Queen Victoria) during Farm and Home Week in 1942.

...Breaking news: Revolutionary medical breakthroughs, such as penicillin being used for the first time on civilians was featured.

...The Birth of Home Economics: Stories highlight how Mac paved the way for Guelph’s future Home Economics program, and eventually for the contemporary Family Relations and Applied Nutrition department and the Department of Marketing and Consumer Studies, by developing a field of domestic science that taught women how to take care of their families.

...Advertising: Like all historical periodicals, the OAC Review provides, through its advertisements, a “snapshot” look at the social mores and issues of its time.

The OAC Review Digitization project has been undertaken on a pilot basis by the U of G Library in order to experiment and learn about the best ways to digitize historical materials, and how best to support similar preservation projects in the future. The project has been guided by Jim Brett and Helen Salmon, both U of G librarians. Jennifer Oldham, a U of G alumni from the Fine Art and Settlement Studies program, and currently re-enrolled as an Honours Psychology student in Applied Social Research, began working on digitization of the Library’s print issues of the OAC Review in May 2011, under the sponsorship of the University’s Undergraduate Research Assistanceship Program. Jennifer’s passion for history and genealogy drew her to the project, “The project revolutionizes the way archival items are stored at U of G and preserves the wealth of information and history in the OAC Review. It combines everything I’m passionate about,” said Jennifer.

For the first year, Jennifer worked very hard to develop a standardized and efficient digitization process. It takes eight-hours to digitize one issue of the OAC Review and involves three basic steps. The first step involves scanning and the second is the most time-intensive as it involves editing through a process known as Optical Character Recognition (OCR), which makes it possible for the content (such as text) to be easily searched. The final step of the process is to upload the digitized files to The Atrium, the university’s online repository for academic articles. The Atrium is fully accessible to anyone, from anywhere in the world.

“The OAC Review Digitization project is beneficial because it preserves the original historical document safely in the Library Archives and the electronic versions allow alumni and researchers to access the content from anywhere in the world,” said Jennifer.

The digitized version is also fully searchable, allowing readers to look for specific topics, places and names. It is a rich source of Canadian social history, and of the University’s heritage.

The preservation of the OAC Review helps preserve campus and local community history. It also gives a chance for OAC and Mac alumni to re-live their university experience.