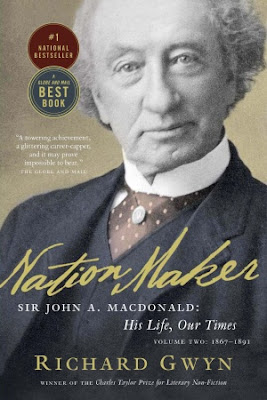 Canadian History Having a Banner Year Across All Media Platforms

"Each year there seems to be more and better books, television, film, and new media programming on Canadian history, which was of course, why the Award was established in the first place," noted Richard Pound, Chair of the board of directors of Canada's History Society. "This year's finalists best demonstrate how far we have come in the last two decades, in our mission to make Canadian stories more available and accessible to a wider audience."

...Richard Gwyn is one of Canada's most respected political journalists. A Toronto star columnist since 1973 and frequent commentator on radio and television, he has also published seven best-selling books about Canadian political history including his most recent two-volume series about Sir John A. Macdonald, Canada's first prime minister.

...Legion Magazine (Canvet Publications) began publishing in 1926 to serve the interests of the members of the Royal Canadian Legion. Over the past two decades the magazine has evolved into an engaging and attractive popular magazine that focuses on all aspects of Canada's military past. Today its readership includes not only the 300,000 veterans who receive the magazine but also includes a growing book and online audience that is estimated at over 1 million.

...Bernard Zuckerman, the seven time Gemini-award winning television producer, has created some of Canada's most memorable historical drama and documentary productions including feature length movies about Dieppe, the Dionne Quintuplets, and most recently The Man Who Made Us: Sir John A. Macdonald movie appearing on CBC in 2011.

...Dictionary of Canadian Biography Canada's most authoritative and fully bilingual historical reference was founded in 1959 as a joint initiative of the University of Toronto and University Laval. The Dictionary features over 8,000 biographies of men and women, French, English, Aboriginal, and newcomers who have in some way shaped the country. The project publishes its biographies in order of the date of death and is currently researching persons who died in the 1930's to complete Volume XV. The DCB has made its research freely available online, where they currently receive more than 1 million unique visitors each year.

...Le Quebec, une histoire de famille is a series of 52 short stories (2-3 minutes in length) about the origins of many of the best known family names in Quebec that are widely broadcast on television (TVA), online, and multiple new media platforms. Narrated by celebrated media personalities the series has gained widespread recognition throughout Quebec and is also the subject for a series of educational resources designed for students ages 10-15.

The Governor General's History Award for Popular Media - The Pierre Berton Award will be presented at Rideau Hall by His Excellency, the Governor General of Canada in December. In addition to a medal, and an all-expenses-paid trip to the celebration events in Ottawa, the winner will receive a $5,000 cash prize from Canada's History Society.

Canada's History Society is a national charitable organization devoted to popularizing Canadian history. In addition to administering the Governor General's History Awards, the Society publishes Canada's History (formerly The Beaver) magazine, and Kayak: Canada's History Magazine for Kids, and also produces a number of educational and online programs to encourage more discovery, celebration, and understanding about our rich history and culture.

More details can be found at www.CanadasHistory.ca.