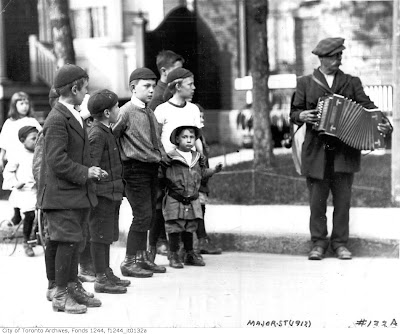 Using photographs taken from the press, municipal government reports, social service agency publications and immigrants' personal documents and other archival items, the exhibit looks at how photography played an important role in shaping both the public perceptions and the varied social identities of Central and Eastern European immigrants in the Ward in early 20th-century Toronto.

Historically, the Ward is recognized as the downtown neighbourhood that included the area around Old City Hall and was bounded by College, Queen and Yonge streets and University Avenue.

"This exhibit provides visitors with a unique and fascinating insight into the portrayal of people who lived in Toronto during the early 20th century, and how our neighbourhoods have changed since then," said Councillor Matlow.

The exhibit includes four new large-scale panoramas depicting contemporary scenes of what was once the Ward neighbourhood, commissioned by contemporary artist Susan Dobson. This free exhibit continues to May 2013.

More information is available at http://www.toronto.ca/archives/.

Toronto is Canada's largest city and sixth largest government, and home to a diverse population of about 2.7 million people. Toronto's government is dedicated to delivering customer service excellence, creating a transparent and accountable government, reducing the size and cost of government and building a transportation city. For information on non-emergency City services and programs, Toronto residents, businesses and visitors can dial 311, 24 hours a day, 7 days a week.