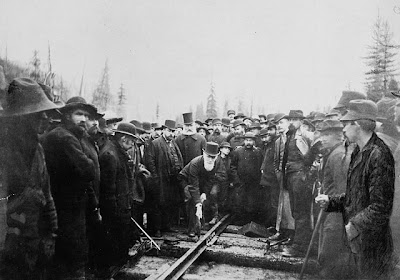 GATINEAU, Quebec, June 14, 2012 /Canada NewsWire/ - Canada's national history museum has acquired the silver "last spike" that symbolizes the 1885 completion of the Canadian Pacific Railway (CPR) and the uniting of the country from sea to sea. This historic artifact was donated to the Canadian Museum of Civilization by heirs of William Van Horne, the legendary railway executive who led the construction project. The donation was unveiled today at the Canadian Pacific Railway Pavilion in Calgary.

The ceremonial spike was carried west in 1885 by the Governor General, Lord Lansdowne. He was supposed to hammer it into the track during the now-famous "last spike" ceremony at Craigellachie, British Columbia. Unfortunately, Lord Lansdowne, with the spike in his possession, was unable to make it to the ceremony. He later had the spike mounted on a stone base and sent as a gift to Van Horne. Held privately by the family for the past 125 years, the "last spike" will be on display at the Museum of Civilization following its première in Calgary.

"The completion of Canada's first transcontinental railway is one of the most significant and famous events in our country's history," said Mark O'Neill, President and CEO of the Canadian Museum of Civilization Corporation. "The ceremonial 'last spike' is an extraordinary artifact that will help us tell this story to future generations. We are very grateful for this generous donation."

"Sir William Van Horne was passionate about Canada and proud of his contribution to its development," said Sally Hannon, a member of the donor family. "I believe he would be delighted to know that this symbol of his greatest achievement will have a permanent home in Canada's national museum of human history."

The building of the CPR was integral to Canada's political and economic development. The promise of a rail link with central Canada helped entice British Columbia into Confederation. The railroad opened the Canadian Prairies to settlement and large-scale grain production, and gave rise to towns and cities across the West.

The donation includes an exchange of correspondence between Lord Lansdowne and William Van Horne, as well as over one hundred personal items which tell much about the man and his family, further enhancing this outstanding acquisition.

The Canadian Museum of Civilization is the centre for research and public information on the social and human history of the country. Located on the shores of the Ottawa River in Gatineau, Quebec, the Museum is Canada's largest and most popular cultural institution, attracting over 1.2 million visitors each year. The Museum of Civilization's principal role is to preserve and promote the heritage of Canada for present and future generations, thereby contributing to the promotion and enhancement of Canadian identity.

The official ceremony marking the completion of the Canadian Pacific Railway (CPR) was held November 7, 1885 at Craigellachie, British Columbia, the meeting point of construction crews coming from east and west.

In the famous photo of the event, company director Donald Alexander Smith, with white beard and top hat, is driving the "last spike" into place. But another person—and another spike—were supposed to be immortalized in the official photo.

The original plan called for Canada's Governor General, Lord Lansdowne, to wield the maul. He had travelled west with a ceremonial silver spike made for the occasion, but had to return to Ottawa before the event took place, arriving home with the silver fastener.

Smith was his replacement, and the iron spike he drove was indistinguishable from the countless others that had been pounded into place over the previous four years. In fact, Smith bent the first "last spike" with a poor swing of the maul. It was removed and he hammered a second into place.

Smith retrieved the bent spike and later had pieces removed and fashioned into jewellery for the wives of CPR directors. The rest of the bent spike is now displayed at the Canada Science and Technology Museum in Ottawa. The second "last spike" was removed (to discourage souvenir hunters) and reportedly given to the son of the patent office president. It is said to be still in that family's possession, reshaped into a carving knife.

Lord Lansdowne had the ceremonial silver spike mounted on a stone base and sent as a gift to Sir William Van Horne, the CPR executive who led the construction project. The silver "last spike" was privately held by Van Horne and his heirs for 125 years. The family donated the historic artifact to the Canadian Museum of Civilization, along with correspondence between Lord Lansdowne and Sir William Van Horne. The collection also includes more than one hundred personal items from Van Horne, including paintings, books, linens, furnishings, photographs and dishes.

Each of the "last spikes" has a unique story. But all symbolize the completion of Canada's first transcontinental railway and the building of a country from sea to sea.