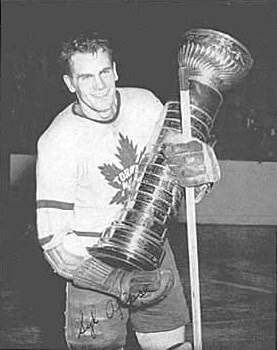 PARIS, Ontario, May 31, 2012 /Canada NewsWire/ - Today, the Ontario Heritage Trust and the County of Brant unveiled a provincial plaque to commemorate Syl Apps (1915-1998).

"Syl Apps was a tremendously gifted athlete, businessman and politician who was well regarded by many for his skill, dedication and the respect that he showed others," said Dr. Thomas H.B. Symons, Chairman of the Ontario Heritage Trust. "We are proud to unveil this provincial plaque, which will ensure that his great character and many accomplishments are remembered for years to come."

Born in Paris, Ontario in 1915, Charles Joseph Sylvanus "Syl" Apps was a professional hockey player, businessman and politician. Throughout his life, Apps displayed remarkable breadth in his abilities and accomplishments. He was a varsity football star and as a pole vaulter won two national championships and competed at the 1936 Berlin Olympics. During an extraordinary 10-season hockey career with the Toronto Maple Leafs, Apps was renowned for his skill and impeccable sportsmanship. He was the Leafs' captain for six seasons and led them to three Stanley Cups. During the Second World War, Apps left the team for two years to serve in the Canadian Army. After retiring from hockey in 1948, he pursued a successful career in business and was elected member of the Legislative Assembly of Ontario for Kingston in 1963 - a seat he held until his retirement in 1974. Apps believed in hard work, respect for others, loyalty, family and faith - and he upheld these values throughout his life.

"Syl Apps made significant contributions to sports, politics and the people of Ontario," said Michael Chan, Minister of Tourism, Culture and Sport. "The unveiling of this plaque is truly a great honour to his memory and a proud moment for his family and community."

"The citizens of Paris have always been proud of Syl Apps - their famous son," said Ron Eddy, Mayor of the County of Brant. "The present citizens of Paris and the County of Brant are enthused about this most appropriate recognition of Syl - an outstanding athlete, a gentleman legislator, a genuine caring citizen and a role model for kids and adults in every walk of life . . . a hero indeed."

The Trust is an agency of the Government of Ontario, dedicated to identifying, preserving, protecting and promoting Ontario's heritage.

...388 provincial plaques across Ontario commemorate people that have helped shape the province's history.

For more information on the Provincial Plaque Program, visit www.heritagetrust.on.ca.