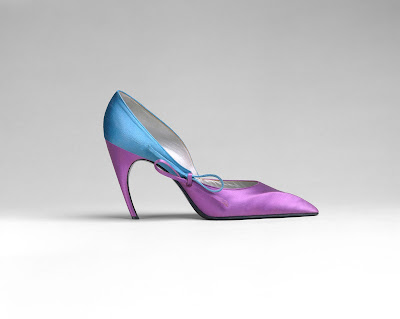 Vivier's early training in sculpture at l'Ecole des Beaux Arts found expression in the way that he sculpted the last, shaped the arch of the heel and angled tip of the toe. Photo credit: Image copyright © The Metropolitan Museum of Art. Image source: Art Resource NY (CNW Group/Bata Shoe Museum)

TORONTO, May 11, 2012 /Canada NewsWire/ - The Bata Shoe Museum is thrilled to announce that its newest exhibition Roger Vivier: Process to Perfection is officially open.

Roger Vivier was one of the most celebrated shoe designers of the 20th century. The exhibition features an exquisite display of his bejeweled and elegantly sculptural shoes which have been found on the feet of elegant women around the world.

Vivier rose to fame in the 1950s when he began to design footwear for Christian Dior and his shoes became the epitome of mid-century glamour. Often inventive in form and dripping with ornament, Vivier's footwear earned him a glittering clientele, an enduring place in the history of fashion and the title, "The Fabergé of Shoes".

"Vivier was fascinated by different heel types and some of his most influential pieces included innovative heels such as his refined needle heel, the choc heel and his iconic comma heel", says Elizabeth Semmelhack, Senior Curator at the Bata Shoe Museum. "We really want visitors to walk away from the exhibition with a newly formed appreciation for his stunningly beautiful designs and his ceaseless effort to hone his process while continually striving for perfection."

Roger Vivier's artistic sensibilities led him to study sculpture at l'Ecole des Beaux Arts between 1924 and 1925 but he was introduced to his life's profession by a family friend who offered him a job at a shoe factory in the late 1920s. By the early 1930s, Vivier was making shoes for famous clients such as Mistinguett and Josephine Baker as well as designing shoes for shoe manufactures such as Delman and Bally. It was also at this time that Vivier began to design shoes for the German tannery Heyl-Libenau through Laborémus, their Paris affiliate.

The advent of World War II required that Vivier close his shop. After a brief period of military service he left France in 1941 for work in the United States at the invitation of American shoemaker Herman Delman. On route to the United States, Vivier met milliner Suzanne Rémy and after Delman cut Vivier's hours due to wartime leather and shoe rationing, he and Rémy began to make hats together. They were so successful that they opened a boutique called Suzanne et Roger on Madison Avenue in 1943. Despite their success, however, at the end of World War II, Vivier once again returned to shoemaking and to Paris.

Roger Vivier first met Christian Dior at a dinner party in 1949. Due to Vivier's exclusive contract with Delman the conversation over dinner turned to hats, with Vivier suggesting that he become Dior's milliner. This idea was not embraced by Dior but at their next dinner the talk turned to shoes. Dior had collaborated with famed shoe designers Salvatore Ferragamo and André Perugia in the late 1940s and early 1950s but Dior was looking for someone new to join his couture house and work with him exclusively. Dior wanted Vivier.

In order to secure Vivier, Dior entered into a five year contract with Herman Delman in January of 1953. For the first two years of the contract the shoes designed by Vivier featured the names Delman and Christian Dior on their label but there was no mention of Vivier. However, there was a keen awareness in the press and with the public that Vivier was the creator responsible for Dior's shoes. In 1955 Dior rewarded Vivier's success by extending to him an honour he would not give to any of his other collaborators, he included Vivier's name on the label of Christian Dior shoes.

Vivier's press material from the first years after he opened his own boutique vaunted the fact that he now made shoes for the collections of designers such as Guy Laroche, Pierre Balmain, and Madame Grès. The most important designer that he worked with, however, was Yves Saint Laurent. While designing for Yves Saint Laurent, Vivier debuted two of the most defining forms of footwear of the decade, the thigh-high boot and the low-heeled buckle shoe. Both of these designs earned him instant recognition as a herald of the new mode but interestingly both styles were rooted in 18th century fashion.

His success was unrivalled as the 1960s progressed; he was "the busiest shoe designer in town". In 1968, the same year he was awarded the coveted Neiman-Marcus prize, he added scarves and gloves to his lines of accessories. In 1969, Vivier created a new department in his salon, Monsieur Vivier, where he offered made-to-measure shoes for men.

The Bata Shoe Museum's Vivier holdings are complemented by loans from world-renowned institutions such as the Metropolitan Museum of Art in New York, the Deutsches Ledermuseum in Germany and Roger Vivier, Paris. The exhibition layout reflects the subtitle of the exhibition with one room exploring Vivier's working process and the other room allowing visitors to appreciate the artistry of his shoes. Beautiful graphics, elegant décor, including opulent chandeliers balance the stark white walls allowing the approximately 65 artefacts on view to dazzle. Due to the fragility of some of the artefacts, every three months will see several of the pieces change offering repeat visitors an opportunity to see additional Vivier shoes.

An exciting programming and lecture series has been developed to accompany the exhibition.

Roger Vivier: Process to Perfection will be on view until April 7, 2013.

About the Bata Shoe Museum

The Bata Shoe Museum is dedicated to uncovering the role of footwear in the social and cultural life of humanity. The Museum's growing international collection of over 13,000 objects touches on 4,500 years of history. A varied programme of events and exhibitions lets visitors discover the stories behind footwear from many lands and cultures. Further information is available at www.batashoemuseum.ca.