Bringing Wellesley Mill back to life 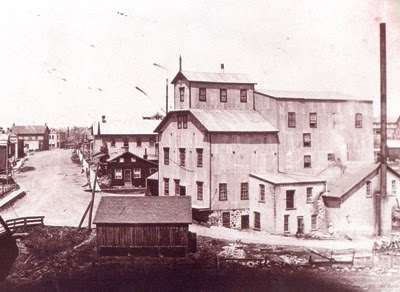 WELLESLEY, Ontario May 7, 2012 from southwesternontario.ca — Driving through Wellesley as a young boy, Dennis Shantz always wondered what was at the top of the village’s old mill, the biggest building in town.

Now, he owns the historic mill and is discovering the past while he updates the building for the present.

The building’s history is obvious to anyone wandering through the mill. The rooms are now mostly empty, but there are still remnants of its past 160 years hidden in some corners. Metal gears and wheels from grain-milling machinery, old wooden ladders, and the original metal boiler in the basement, all serve as reminders of the structure’s history as a water-powered flour mill. On one thick wooden beam, a weathered “No Smoking” sign warns workers from long ago not to risk a fire.

Shantz, as one of the mill’s owners, has already taken away many historical items that later could be displayed in the mill or given to a historical society. There’s no legal obligation to protect the building’s heritage, but Shantz said his priority is to save what he can and protect the mill’s original look.

“I’m in awe at how they could have done this 150 years ago,” he said. “I’m in awe that it’s still standing…now hopefully it will stand a couple hundred more years.”

Back when the mill was built in 1856, everything was run by belts and pulleys, Shantz said. There were many leftover gears sitting all over when the clean up of the building started.

“There are lots of little treasures in here,” he said, and he’s finding more all the time. As an example, he pulls out part of an old conveyor belt, with metal scoops for carrying grain. “These would have been hundreds of feet long,” he said.

Construction is currently underway as the Wellesley mill is modernized for new tenants to move in. Electricians, plumbers, and contractors are busy inside, and it will cost $27,000 to bring the 13,000-square-foot building up to code.

The original building was still in very good shape, said Shantz. But to meet modern building codes, the thick wooden rafters and support beams had to be reinforced with metal and wood.

A sprinkler system was also installed to fight fires in the old wooden building.

Once changes are finished, the We Chill N U Grill restaurant is working to move into the ground floor. The mill’s basement and upper floor are still empty and available for tenants.

That basement was built with rough stones two feet thick, and is Shantz’s favourite part of the building.

“It’s like being in the basement of a castle,” he said while admiring the dimly lit rooms. “You can see how well-built it is.”

On the main floor, the original brick walls are being covered up, but the original floor of wooden planks is staying.

“They say when the mill was running that floor just shone from all the feed bags polishing it,” Shantz said.

He bought the mill several years ago from Wellesley Township amid worries that the empty building might not be preserved.

“It really looks good compared to what is used to be,” he said. “It’s come a long way.”

The mill was originally built in 1856 by the Doering Brothers, a prominent family from Wellesley’s early days. In 1910, the building was expanded to add a third story and large front section.

Changes in technology over the years have seen the mill shift from waterpower to steam, and finally to electricity.

Visit the Wellesley Mill website and check out their photos here