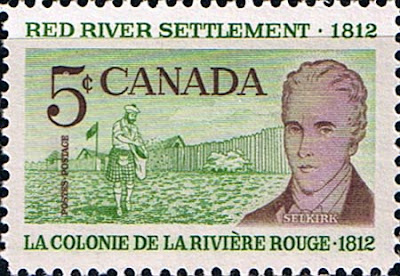 WINNIPEG, May 3, 2012 /Canada NewsWire/ - Thomas Douglas, the 5th Earl of Selkirk, dreamed of offering Scottish and Irish farmers their own land to work and encouraging western expansion. That dream became a reality in 1812, when the first wave of settlers reached Assiniboia—or the Red River Settlement, as it would come to be known.

While the settlers expected an unpopulated wilderness, they found established Aboriginal, trader communities, hardship and uneasy loyalties. Those Red River settlers planted the first grain crops in the prairies and built relationships with neighbouring Aboriginals. Two hundred years later, the original settlement is the City of Winnipeg. The stamp we issue today honours both the dream and the subsequent growth of our country that it inspired.

"The Red River Settlement is a source of pride for Manitobans, and formed the basis of what our province is today," said the Honourable Steven Fletcher, Minister of State (Transport) and Member of Parliament for Charleswood-St. James-Assiniboia. "I am pleased Canada Post is honouring our shared heritage with this important stamp."

The stamp depicts various kinds of people involved with the initial wave of settlement. They are not drawn as individuals but as abstract representations of the different characters and ethnic groups in the area at that time. Métis, local trappers, a native Chief and the settlers, each playing a role in the establishment of this progressive colony, are represented on the stamp.

"The complexity of the situation in 1812 is expressed visually. The mood of the stamp is not a joyous or happy one; the low clouds are ominous and perhaps representative of stormy times to come."

The Red River Settlement stamp measures 45 mm x 25.5 mm (horizontal) with 13+ perforations and is printed by Canadian Bank Note on Tullis Russell paper using lithography in five colours. They are general tagged on all four sides. The official first day cover will be cancelled in Winnipeg, Manitoba. The stamps are available in panes of 16 stamps.

Additional information about Canadian stamps can be found in the news section of Canada Post's website, and photos of these new stamps are also available. Stamps and other products will be available at participating post offices, or can be ordered online by following the links at canadapost.ca/collecting, or by mail order from the National Philatelic Centre. From Canada and the USA, call toll-free 1-800-565-4362, and from other countries, call 902 863-6550.