Finally, the Christmas Charts Get Some Xmas Factor! 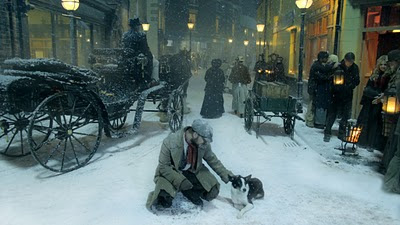 LONDON, November 29, 2010 /Canada NewsWire/ - My Favourite Time of Year by The Florin Street Band is being hailed as the first classic Christmas song in decades. The ambitious Victorian-themed project features dozens of musicians including The English Chamber Choir who were recorded at Trevor Horn's studios in London. The accompanying period music video attracted the skills of top American cinematographer, John Perez, and sees an entire Victorian town covered in snow, with a cast and crew of over 100 people. This was all achieved without record company backing because of one man's sheer determination. After three years of trying to persuade the major record companies to compete with The X Factor, British composer Leigh Haggerwood decided to make it happen himself by gathering his musician friends and using his life savings to fund the project.

Disappointed by the demise of the Christmas charts, Leigh Haggerwood set about writing an authentic, traditional style song that would include all the elements of true Christmas classics.

"I grew up in the 70's and 80's at a time when everyone looked forward to the charts on Christmas day, but the magic has gone because nobody seems to be writing new Christmas songs anymore and the music industry is now geared towards albums, not singles. Writing a song that could match the standard of the songs we know and love was a massive challenge for me, but as My Favourite Time of Year evolved, it felt like it was meant to be. I imagined the music video as a Victorian winter wonderland setting as I was writing the lyrics, but an idea like that costs money, and I couldn't find anyone to back me. When the Facebook campaign made number one at Christmas 2009 I was quite encouraged - it was clear that people really do care about the Christmas charts, so I took the decision to gather together my musician friends and form a collective which I called 'The Florin Street Band'."


Video production companies would not entertain such a grand production idea with such a small budget, and this was the next barrier. But Leigh was fortunate enough to discover a talented director called Nick Bartleet and his company Pixelloft.

"I was blown away by the quality of his work. He loved the song and totally got my vision of snow-filled streets, lanterns, and a magical feel. Budget was a big issue; we squeezed every possibility out of what I could afford and asked friends and family to help. Meanwhile, a legendary American cinematographer called John Perez heard about the project and loved the idea of the quaint English Victorian town so he offered his services as Director of Photography, and with his incredible CV which includes videos by Beyoncé, Jay-Z, Rihanna and Coldplay, this was a major scoop. We chose Blists Hill Victorian Town at Ironbridge in Shropshire as our location. It's a wonderful place, very authentic and quaint and the result is a beautiful video that really captures the spirit of Christmas."

My Favourite Time of Year is a heart-warming Christmas song with strong melodies and a style that echoes classic Christmas carols. It heralds the start of a new era in Christmas song writing and could also be the biggest wake-up call that the British music industry has had for years, not least because this was all achieved without them! Released December 6th 2010 - UK, USA, Canada, Sweden, Australia.

You can follow the Florin Street Band on the following social media channels: