100 Years Ago Today: Roald Amundsen Stands On The South Pole 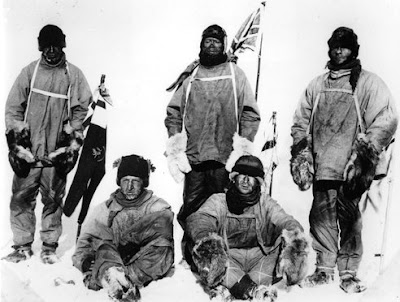 One of Scotts party/Public Domain

One hundred years ago today, Roald Amundsen arrived at the South Pole and planted the Norwegian flag on the spot. Anyone who has read Roland Huntford's 1979 book Scott and Amundsen: The Race to the South Pole is pretty much convinced that Amundsen was an exploring genius, learning from the Inuit how to dress, how to eat, how to use dogs and travel in comfort and style, and that Scott was a fool who used horses and automobiles unsuited for the campaign, and had nobody to blame but himself for his death. The Sunday Telegraph review said "In death, Scott became immortal. Now his reputation and character are torn to shreds." In the Spectator, they wrote "the plaster saint has been smashed forever!"

Now, on the hundredth anniversary of Amundsen's victory, Scott's reputation is on the rise again. He was interested in science and research; he was actually slowed down on his trip by scientific equipment. Amundsen was all about speed and efficiency. On Discovery News they write about how Scott even dragged rocks around on their sleds:

As Scott and four of his men were returning from the South Pole to their base at Cape Evans, 800 miles away, they stopped to pick up some unusual rocks at Mount Buckley, along the Beardmore Glacier.

The rocks later turned out to be fossils of Glyssopteris, an extinct fern that had also been found in India, South America, Africa and Australia. Scott's find later proved that that Antarctica was once part of a giant super-continent that broke up 160 million years ago. The fossils were found inside a tent alongside the frozen bodies of Scott and his men.

Huntford would say that Scott had rocks in his head instead of his sled, carrying all that extra weight; For Scott, the science mattered. His team did important meteorological work and studies of marine life. Apsley Cherry-Garrard complained that he almost died collecting some birds eggs that in the end sat in a drawer at a British Museum for thirty years without being looked at.

Now, a remarkable new book has been published that shows another side of Scott: He was a photographer too. David Wilson's The Lost Photographs of Captain Scott is a stunning book, if only because of the surprise that such a collection of photographs could kick around, essentially lost in a basement for almost a hundred years. I wonder, if Huntford had seen these photographs, if he could have been so dismissive of Scott; they show a serious and determined man, on a heartbreaking and backbreaking struggle.

Amundsen went to the South Pole the way the Americans went to the moon: design a trip to take as little as possible and throw everything you don't need anymore away when you are done. In space, it was the lunar module; for Amundsen, is was the dogs. You get there fast, but you don't leave much of a legacy. Scott was there, literally, for the long haul.

December 14, 1911: Roald Amundsen, the brilliant explorer and discoverer of the Northwest Passage, becomes the first person to reach the South Pole. He then sat down and had a cigar and a shot of schnapps; not a bad plan at all.

...read the fully story at TreeHugger.com