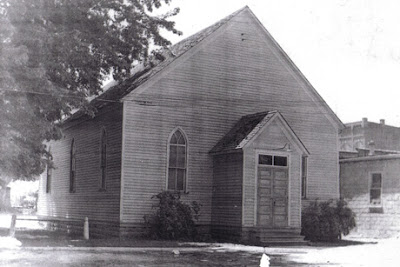 The First Baptist Church of Dawn - established by former slaves and free African Americans in the 1840s - held its meetings in private homes, then in a log chapel at the British American Institute. In the 1850s, a Baptist congregation met on Main Street in Dresden, until a lot was purchased from parishioner George Johnson on the present site. A church was built by the congregation and the inaugural service of the First Regular Baptist Church was held on November 15, 1857. Reverends William P. Newman and Samuel H. Davis, the church's "founding fathers," were prominent abolitionists and former British American Institute headmasters. Newman raised much of the funding, and Davis oversaw the construction of the church, donating 100 cords of wood to pay for the sawing of the lumber, which forms the original structure of the chapel to this day. For generations, the church has been an integral part of community life in Dresden. Today, it stands as a testament to the faith, fortitude and determination of these early pioneers.

Yesterday's unveiling ceremony took place at First Regular Baptist Church in Dresden, where the provincial plaque will be permanently installed.

The Ontario Heritage Trust unveiled this provincial plaque as part of its program to commemorate the International Year for People of African Descent, made possible with funding from the Government of Ontario. The Ontario Heritage Trust's Provincial Plaque Program commemorates significant people, places and events in Ontario's history. The Trust is an agency of the Government of Ontario, dedicated to identifying, preserving, protecting and promoting Ontario's heritage.