An Ontario Veterinary College pioneer will reach a special milestone this week. 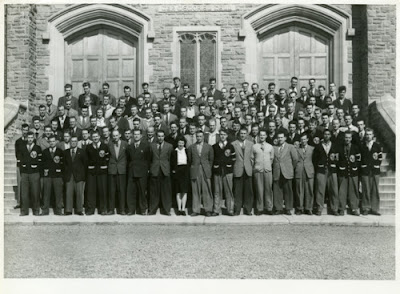 photo credit: ovc1950OVC’s Class of 1950 is pictured on the steps of War Memorial Hall, with Joan (Belcher) Budd the lone woman in the front row, and one of only two women in the entire class.

Dr. Joan Budd, a member of the Class of 1950 and the first female veterinarian to hold a faculty position at OVC, turns 100 on Nov 9.

Dr. Elizabeth Stone, OVC dean, will host a birthday party honouring Joan and her contributions to OVC on Wednesday.

Althought the OVC had ceased to be an all-male bastion in 1924, the “old guard” was still very much present when Budd first applied to the college after high school.

“At the time, they told me veterinary medicine wasn’t a suitable career for a woman, so I went into teaching,” Budd recalled in an article published in the fall 2011 issue of The Crest.

But after teaching in rural Manitoba and serving in the Second World War, she was accepted into OVC. Following graduation, she completed graduate work in virology at the University of Wisconsin, then joined the OVC faculty the following year. During her career, she made a number of important contributions to the study of diseases in fur-bearing animals such as mink as well as fish.

Over the years, she has remained actively involved in the life of OVC and spends her summers on Manitoulin Island.