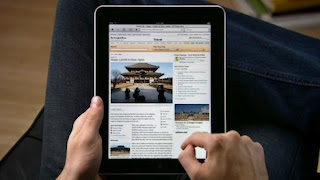 The Digital Migration Continues to Change the Face of Consumption

A new study from the Ponyter Institute reveals that by the end of 2010, more people were reading their news online than in traditional newspapers. 34% said they read news online, while 31% read the paper. A noted shift in advertising revenues supported the same claim -- more money went to online sources than to daily dead tree editions, too. This story serves to highlight a changing trend not only in how we consume media, but how we consume resources as well.

Poynter's annual State of the Media report showed that the web was the second most popular source of news; local television news is still the number one source for the majority of people. Local TV also led in revenues, with digital media coming in second. Also, online news media was the only medium that saw growth year-over-year; from radio to television to newspapers and magazines, every other medium saw a decline in audience.

And then there's the scary part: "In general, it can be said that text-based news audiences are dwindling. Only 40% of people in Poynter's study said they read the news in an online or print newspaper, a 12% drop from five years ago." But I digress.


The most common reactions to this story will probably be further musings on the demise of the newspaper and reflections on the role of media in an age that's continuing a march towards supreme digitalization. And the poll certainly raises the all those old questions about how we consume new media. But there's another kind of consumption trend that this poll highlights; that of good old fashioned natural resources. Reading the newspaper is a highly consumptive habit -- it requires a continuous supply of wood (or post-recycled consumer product).

Of course, reading news online is a consumptive habit, too, just a different kind. It drains electricity -- which, here in the US, is most often generated by the burning of coal -- instead of forestland. We've done comparisons between online reading and newspaper reading to try to suss out which is actually 'greener', and it comes out pretty close (unless you get your power from clean sources)... read more story at TreeHugger.com